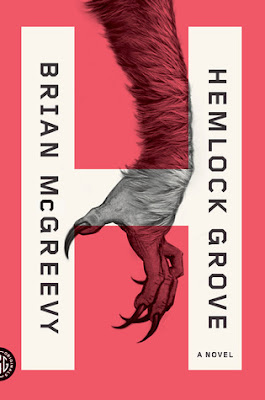 Netflix is on the move to make original content for their viewers. As a Netflix viewer, I think this is kind of cool because I'm tired of hearing about all the HBO dramas that are just so totally amazing and deserve all the Emmy nominations.

I also don't subscribe to HBO, so I can only view that content if I buy/rent the DVD's -- which is just too much work. I do subscribe to the instant streaming of Netflix, however -- so if any of these new Netflix shows are amazing, be sure that I will be rubbing it all up in your business on Facebook.

One of the original series that I read about is based on a book called "Hemlock Grove." A review mentioned how this book melded some of the most famous archetypes in Gothic horror like vampires, Frankenstein's monster, werewolves, mad scientists, vampire/werewolf hunters, etc.

What? Put that book in my hands, NOW!

I wasn't quite sure how I felt about all these archetypes shoved together in one book -- especially when it dealt with high schoolers. I've "been there, done that" with the whole "being a teenager is horror" metaphor ("Buffy the Vampire Slayer", R.L. Stine's "Fear Street", and Christopher Pike novels), but I decided to revisit it.

It has also been written that it is Brian McGreevy's attempt at bringing back the Gothic novel.

What's a Gothic novel? Well, um, think of "Dracula" and "Frankenstein" as your basics. The heroes in these types of novels are usually seen as an"anti-hero" (totally flawed), and the villain is the epitome of evil. The tone and mood of the story is often that of despair and darkness. Very bleak. Graveyards. Castles. Large mansions made of cold stone. Just imagine Edgar Allen Poe in the corner of some damp basement crying -- that's a Gothic novel.

So, essentially, it's my kind of story.

And then I saw that werewolf hand on the bright pink cover, and I decided that "Hemlock's Grove" was a book that I needed to pick up.

Luckily my library had a copy. Go me.

Before I get into the plot, I will mention that McGreevy did a nice job of enmeshing all the different archetypes together. He did so by not telling the reader every last bit. He left a lot for the imagination, and I walked away from the book with major question marks. Will there be more afterward, as we revisit these characters? Or is McGreevy going to answer these questions with the Netflix Original series, also named "Hemlock Grove" ?

Only time will tell...

A young girl is murdered in Hemlock Grove, and while every student at the school points their finger at Peter Rumancek (the odd Gypsy kid that is new in town and lives at the local trailer park), because there are rumors he's a werewolf, he decides to take it upon himself to find the killer. He teams up and becomes friends with an unlikely friend--the rich Roman Godfrey. Apparently the Godfreys come from a line of vampires...I think. It's never truly mentioned. You just need to use your inferencing skills.

The Godfreys are connected to a company that sounds like mad scientists, Roman's sister seems to be the work of such mad scientist -- again, it's never said out-right -- and there's drama attached to the adults in the Godfrey clan. It's a lot of horror archetypes shoved into one book, and it almost reminds me of the Mattel doll line called "Monster High."

It's obviously a bit more sophisticated than that. The language at times can be a bit stilted -- like McGreevy is winking at the laborious languages of Gothic novels past (compared to our self-published authors of today's yucky romance). This might be a turn off to non-language aficionados (like people who are reading "Shades of Gray"), but I enjoyed the challenge.

The book just sort of ends. Around the inter-webs, there's rumors that more are coming. I sure hope so. And I hope the covers are just as bright as this first one. Maybe a neon orange, a bright green. Purple maybe? Colors you don't normally associate with a Gothic horror story.
Labels: book review