The Wizard of Oz by L. Frank Baum 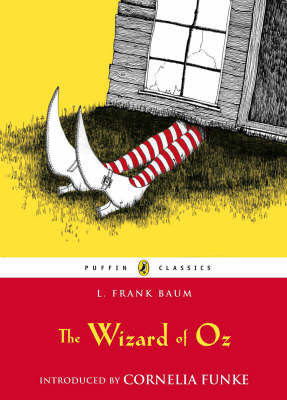 Where do I even begin? As I read this children's classic for the first...ever, my knowledge of Oz had already been built up by all the different works that used L. Frank Baum's book as a reference point. I knew this going into the novel. I knew that I was going to be surprised, or let down, or something.

And I was. I was pleasantly surprised at some points and just completely weirded-out at others.

Back in the early 20th Century, what were these children's authors on?

My world of Oz was constructed by all the different pieces out there created by those who have fell in love with it in some way or another, and the vision of Oz, for myself, has now been made whole. I'm happy that I actually read "The Wizard of Oz" last -- it helped me appreciate Dorothy's journey that much more, as well as see how all the other authors and movie makers out there were inspired by this book.

Oz was introduced to me, like it probably was with most people, by the movie featuring Judy Garland, made famous with those ruby red slippers. The dress she is wearing in that movie -- correct. The color of the shoes? Wrong. Everything we have ever known about "The Wizard of Oz" in some places were corrected. I knew the shoes were silver, and not ruby, so that wasn't as much of a surprise. What was a surprise? The flying monkeys and how they were controlled by a hat. They're not evil...but indifferent, until you are the owner of that hat.

What else was a surprise? The Wicked Witch of the West. Oh, I know she was nothing but evil...but I don't remember reading that she had green skin, and she also had only one eye. Of course there was a scarecrow, a man made from tin and a lion that was cowardly, and they all journeyed together to visit the great wizard. There was a yellow brick road. There was a giant spider.

I wonder if that's where Stephen King got his inspiration for "It." From a little, old children's tale.

My interest has been piqued, and I plan to return to Oz with the next novel in the series: "The Marvelous Land of Oz," where I'm sure to find that it's not exactly marvelous...since there has to be another Big Bad for the good guys to destroy.

My world of Oz, before I read the book, came from the following sources:

"The Wizard of Oz" movie. | "The Wizard of Oz" stage musical, where Dorothy dances with jitterbugs. They have not appeared anywhere else. | "The Wiz," which I thought was horribly creepy. I just remember the subway scene. Was there a subway scene? I can't wholly remember... | "The Return to Oz," where the evil queen changes her heads? Where the yellow brick road is completely broken apart?  Creepier than "The Wiz," but easily more watchable. | "Wicked" by Gregory Maguire, where we learn that the Wicked Witch of the West was terribly misunderstood and also friends with Glinda. One of my favorite takes on L. Frank Baum's classic. | "Wicked" the musical, which actually goes in a few different directions than the book...but pays homage to the other parts of Oz we should be familiar with. | "The Muppets' Wizard of Oz," which isn't really one that I like. | "Tin Man," a SyFy channel original miniseries that I caught up on using Netflix that stared Zooey Deschannel. That one was actually an interesting spin.
Labels: book review oz