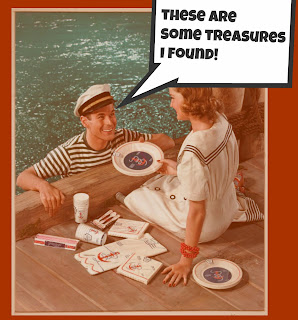 I had this friend in elementary school named Eric. You might know him from his shindig in The Click Five as the lead singer. Doing a little Google search this fine evening landed me at his updated website. It looks like he's been working on an album.

That's not necessarily what I wanted to talk about. My inner circle of famous people is, really, zero. We've all got that one person who we knew when we were younger and how they're, like, famous and stuff.

The other guy I know? He sings in that little group you might've seen at the Murat called Straight No Chaser at Christmas time.

And now I'm totally off the ball. This was supposed to be about Play-doh. Simple as that. The mold-able substance that's softer than clay, that you can push through all sorts of plastic gadgets...and my introduction was just going to be about this guy, Eric, who just happens to have a singing career, and how he ate a massive chunk of it once. Right in front of me. Scooped it right out, I think it was red, and shoved it in his mouth. And he chewed. And chewed. And then swallowed the God-awful (at that point? Soggy mush...) mouthful. I remember taking a small piece and tasting it, myself, but it wasn't the size of a fist like Eric's.

I learned that it was saltier than the inside of a pickle jar -- saltier than your foul-mouthed aunt's tongue. 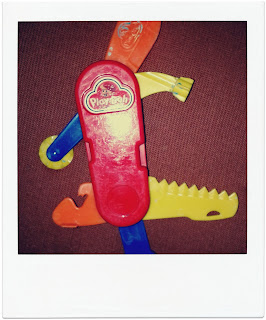 And, boys and girls, what's the lesson we can take from this? Just because it says "non-toxic" on the container doesn't mean you need to go and eat it. And just because it's toxic, doesn't mean you need to go and make meth.
But, did you have this? They don't make them anymore. Otherwise every toddler would be walking around with them hooked to their belts, handy, inside a felt and yarn carrying case. This knife was what one needed when faced with a Play-doh conundrum. It could do everything. It made coins, it sawed Play-doh in half, it punched out little nubbins. There was nothing this thing couldn't do.

If you were out in the woods and you were faced with a bear, you would probably lose an arm, but you would scramble after the Swiss Army Play-doh Knife, because having one arm? Sure, no big deal. Losing your amazing Play-doh toy?