I'm not sure what I was watching that spurred the idea to write about things I need to know in the throws of an apocalypse, but I do know the first thing I wanted to hit on: My inability to farm.

The first thing that would happen? The grocery stores would be ravaged. I've seen the movies...and I live in a community where, I'm sure, people own guns. People will tote their guns as they ransack the grocery stores for canned goods. I don't want to die in the midst of food recovery, so I'll just wait that part out.

Instead of hunting for canned goods (and all the fresh fruit and packaged meat will be the first to go), I think the first thing to do in such a scary moment is drive down the road a bit -- we live just a few miles from farmland -- and befriend any farmers. They know a thing-or-two about food production, right? I will help them. I can be a farm hand. I won't care about writing and publishing anymore, since all avenues toward it will be gone, so I can focus all my energies on survival, just fine. And when we come across other "survivors" and we'll sit around the bonfire during our nostalgic conversations about how it used to be and they'll ask, "what were you?"

And then I could go into a laborious story about how I was just about published until it all ended. 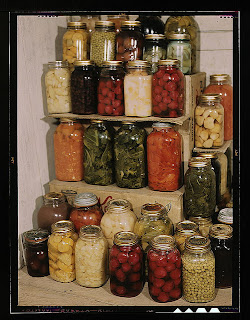 "Yes. I am interesting."

And then we'd get back to work hulling corn around the bonfire, and what-not.

Although, I think that survivors would come with children, and they'll want their children to learn -- the truth of my past will come out:

"You were a teacher, you say?"

"Then, while we work, you will teach the little 'uns to read."

"But, I want to work in the land..." I'll say, looking down at my feet. I'm not one for confrontation.

"No, you will teach the children."

Yes, finding someone who knows about the land would be invaluable. The next thing? Maybe a food historian. Someone who knows how the pioneers did it. At least Ree Drummond has something going for her, she knows how to cook and she lives on a farm. I'm sure they know how to store meat without refrigeration, too.

Remember that grocery store? Well, I think it's time to go get all the salt. I'm assuming the gun-toting crazies forgot all about seasoning. If you have cows, I have salt.

Maybe I'll become the Salt Lord. You'll come to my house, trade with me goods that will help my survival, and you can have some salt. That rare pink salt? That will cost you much more than the Morton.

(I'll make sure to hit up Marshall's gourmet food section while you all go to grocery store.)

"You need to see the Salt Lord," they'll say. "He started out teaching the kids, but he's much better at salt. Salt's his thing."

Yeah, you heard the people. Salt's my thing. I better catch up on some reading so I can be prepared.

Labels: notes at the end of the world