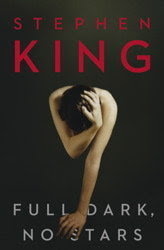 A husband murders his wife and then drives himself into madness, but that madness only slowly comes when everything else around him begins to spiral downward. And the worst part is? The murdering of his wife isn't the worst part. I will groan a bit because the wife is thrown down a well a la "Dolores Clairborne," but I also welcomed the well, because sometimes a writer needs to revisit a place he's been before. Who says you have to be completely original all the time? The story's darkness, read on a gloomy day, compelled me to put the book down for now and wait a bit before I pick up the next installment. I will be reading this one in four different sittings throughout the next few months. Presumably, on a happy and warm summer day by the pool.And alas, those summer days came, and I have finished the book...

This is not my favorite collection by King. In all actuality, I don't really like his collections. His short fiction and novellas take on a much different feel, to me, then his novels. It's the same way I feel about his screen writing during the 90's with some of the (horrible) horror movies. That's not my favorite voice of his, either. It doesn't mean that I wasn't clutching the book at some parts, but...I don't know. It's not that it was "dark," and really...the stories could've been much more morose, and it's not that I didn't enjoy them -- I did, and I think it's a great addition to his, already, massive collection.

The second story, "Big Driver," was a "revenge fantasy" dealing with a mystery writer, having been raped, going after her attacker. The story does not go as planned. There are quite a few surprises, and it's interesting how the main character, Tess, begins to give her cat and the Tom Tom (GPS) a voice. She leaves a speaking engagement and takes a "shortcut" that flattens her tire and puts her in the hands of Big Driver, but there's more to Big Driver than we realize (not in a horror, fantasy type of deal) and Tess begins to figure this all out. It baffles me how King can just attack uncomfortable ideas in writing. I sly away from anything like that, as a writer, and I think it's very brave of him, especially when he speaks in a woman's voice. I think that's one of my favorite parts about him...he's not afraid to speak in a woman's voice or a man's voice as his narrators/characters. To my knowledge, I think he does an excellent job using a female voice -- but this is coming from a male. I could be wrong.

The third story, "Fair Extension" is the shortest of all four stories and is the most King. It feels like his O. Henry award winning "The Man in the Black Suit." The main character has cancer and is facing his death, but not before he makes an interesting transaction with a man named Elvid (clever reworking of the word devil). He is able to extend his life, but for an interesting price. He has to choose someone he knows, and hates, to pass his "sickness" to. He chooses his best friend, whom he is severely jealous of. And it's not really the sickness that this other person gets, but terrible misfortune. I think this story was almost the darkest because I was cheering on the main character who was now alive and well, and I didn't care about the best friend and his misfortune...even if the best friend didn't really do anything to deserve it. It kind of brings out the ugly in the reader.

The last story, "A Good Marriage" is told from the wife's point of view, Darcey, and even though I'm a guy, I feel like he does a good job writing from the woman's perspective. The wife discovers something about her husband she would've never expected. Something no one would ever expect. It can't be said without spoiling the story, but I wasn't quite sure where King was going with this story...which was good. I was more than happy to keep guessing.