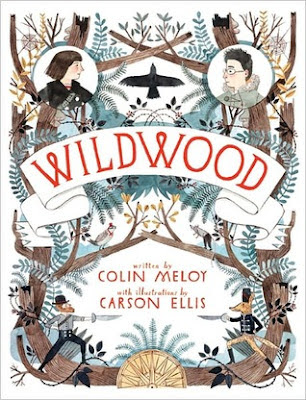 If you're little middle schooler is a total hipster, hook them up with this story. It's the "Wizard of Oz" for hipsters. If you want your child to read more classical-style literature (of the fantasy genre), "Wildwood" is a good gateway drug. I had to remember that the age group wasn't really "young adult" as much as it was "middle grade." Take this into account when you read it.

For us adults, this premise has been seen before, but remember, your middle school-aged child has not, I repeat, has not read or seen everything you have...so this story will appear to be new to them. To an extent.

We have Prue and Curtis, two acquaintances, who just so happen to be out and about at the same time when Prue's little brother is snatched up by a murder of crows. The crows take the baby into the "Impassible Wilderness" that's by Prue and Curtis's city. There are rumors about this forest, stories that are told, and so everyone stays out. Plus, they can't really enter it...because they're (well, we're) "outsiders."

Parts of the "Impassible Wilderness" is aptly named "Wildwood" and it is home to people and animals -- most of them talking -- that have lived (and fought) there for who-knows-how-many-years.

Let me interrupt my plot synopsis by telling you that the author of the book is the lead singer to The Decemberists.  I adore The Decemberists. When I first learned of them, which was actually when their first album had just come out (not when all you hipsters learned about them much, much later), I thought they were weirdly British (they are not -- they're from Oregon). I am an avid fan of Colin Meloy's lyrics and voice, and the stories this band has weaved...well, how could I not pick up a book penned by him?

His vocabulary in this book is daunting. I appreciate that he's throwing out words that will challenge middle grade students. They so need it. Why write at their level, when they can read at ours? (To a point, of course.)

So, we find Prue and Curtis having different adventures in the wood because they were separated by coyotes. Curtis goes and fights with the coyotes (and learns of their true nature...as defenders of the Dowager Governess, who has plans of her own...so he has his own journey), while Prue does what she can with the local government, run by a man named Svik, and realizes she will get nowhere.

There are mystics, we learn how different the South Wood is compared to the North Wood (you will much rather live in the North Wood), there are Bandits, as well as a coyote army. It's a fun world that's been created and it's very reminiscent of "Alice in Wonderland" and the "Chronicles of Narnia," especially this first one that deals with the evil Dowager Governess as a witch of sorts -- she mirrors the White Witch in "The Lion, the Witch and the Wardrobe."

I wanted to love the book more than I did. It came from a creative mind that I greatly admire (who also wears some pretty slick glasses), and the illustrations are styled the way I like them. The sequel (of this foreseen trilogy) will be out this Fall (of 2012). It has a lovely ending, with the promise that we will return back to the world. Now that it has been established, I assume the last two tales will have a stronger originality to them, since Meloy has crafted a mythology that he can now work within.

If I get my book published, however, I'm certain it will also be compared to other novels of fantasy out there...so I can't judge too harshly.
Labels: book review