"You committed a Mr. Williams!" 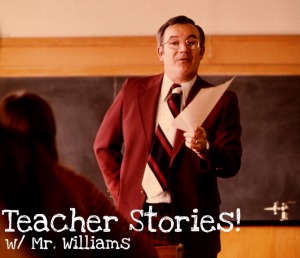 I remember listening to stories from my aunt about when she was in high school. Apparently, one of her teachers would kick his foot up on the desk or chair. He would lean on his knee, pick his nose and put the boogers in the cuff of his pants!

Ok, sure, sometimes a teacher gets a booger, and maybe he is out of tissues, so he need to discreetly use a thumb or toe, but to kick his leg up on the desk and, in front of rows of your students, drop those snot crusts into the up-turned fold of his pants? So, they go with him everywhere?

I don't think I give my students enough ammo to strike me down, or tell horrid stories about me behind my back. Not now.

But, there was this one time that I might have, perhaps, given some kids a good wad of ammo. They probably still talk about it today, now that they're all in their 20's, and groan and say, "Ugh, you just committed a Mr. Williams."

And what is a Mr. Williams, you might ask?

It was my first semester of teaching, and I got a wonderful gig at the high school in my current district. There weren't desks in my classroom, but tables. There were two kids per table, and I was sitting at a table in the front of the room. There were two girls sitting at this table. They were all listening to me as I read aloud to them.

That's when it happened. It wasn't loud, mind you, and most of the students probably had no clue what was going on. My bottom threw out a silent-but-deadly toot. It was no big deal, right? Everyone does it. Except this one, while I read, began to creep. It creeped hard. Up my nose. In my mouth. Into my pores. It was bad. I tried to ignore it, but for some reason, the sheer awfulness of the situation began to strike me as funny. In my head, I realized I had committed the sin of being that teacher. This was funny to me. And so I started to laugh.

I laughed hard. I couldn't breathe. I couldn't read. I forced my mouth around the words, but my cheeks just wouldn't let me complete the words. I placed the book over my face and continued to laugh.

"Oh, I just farted, and it smells like rotten death. I can't help it, but I think it's hysterical!"

I couldn't say that! When did a teacher admit to a bodily function? I couldn't give myself up like that. I had my dwindling dignity to hold onto.

So, I just told them, "Oh, something just struck me as funny."

"What is it? What struck you as funny?"

They never ask questions about the homework, but they ask why I'm laughing? It was so unfair. I had no good excuse. "I just thought of something funny from earlier today," I said.

"What is it?" they kept asking.

By then, my fart had turned into that socially awkward person that just doesn't know when to leave. My laughter, at that point, was finally starting to die down, but not without the loss of my innocence. The two girls who were sitting at the table that I was sitting on gave me a dirty look, and that dirty look said: "We know what you're laughing at, and we don't think it's funny."

I'm sure the news spread after class. "Did you smell Mr. Williams?"

And a good friend would come up. "What are you talking about?"

"Do you know Mr. Williams?" the others would ask.

"Yeah, I've heard of him. People say he's an amazing teacher and that they want to be just like him."

"Well, not anymore. He farted in class, it smelled terrible and he just laughed at it!"

The girls would just roll their eyes in disgust. And then, if they ever farted in public around each other, they would say, "Ugh, you just committed a Mr. Williams. Say you're sorry!"

Now, eight years later, the high school kids are probably still calling a public fart a "Mr. Williams." At this point, they don't know who Mr. Williams was, but the term is probably stuck in their school lingo, one of those school-wide slang terms. We say it, but we don't know where or how it originated.