I totally re-read "Bag of Bones" by Stephen King

When I found out A&E was making a mini-series from Stephen King's "Bag of Bones," I was like, what? I haven't read that since I was a young pup, when it was probably totally inappropriate for me to read it!

I decided to re-read it before the movie came out. When the thought first occurred to me, oh, a few months ago, that's when I should've read it. Instead:

I pulled it off the shelf and decided to read it the week before it airs.

I'm also a slow reader. It was not going to be easy.

Then, I started doing something I never do when it comes to books I own -- I started highlighting passages, and then I started writing, in pencil, next to those passages. Books have always been sacred to me. Writing in them just seemed sacriligeous. Except for school books I owned. Those were FAR from important to me...well...they were important, but...oh, nevermind...

It felt liberating to write in one of my books. Not too liberating, though. If I wanted to go absolutely crazy, I would've written in Sharpie. Or at least pen. Using a Sharpie is what wild men use. The serious reader, the one that writes in every book and then writes a paper about it, and then publishes said paper. And teaches a college lit. class. That crazy man.

Or as we will call them: Cray-cray.

I'm not necessarily going to write a paper, but the act of highlighting and writing in the book isn't speeding up the process, so why am I doing it? It feels intelligent, I think that's why I'm doing it. After teaching middle school kids to do this and watching them, well, not, it was nice to see me be a cognitive reader.

See exhibit A below: 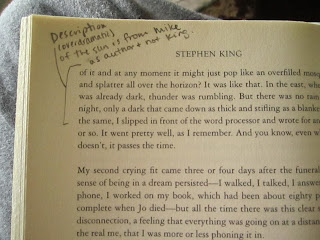 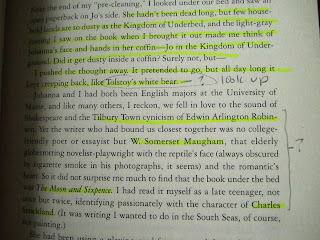 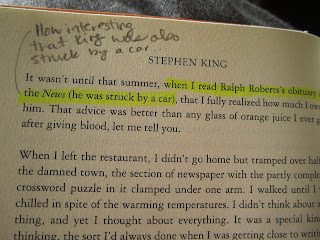 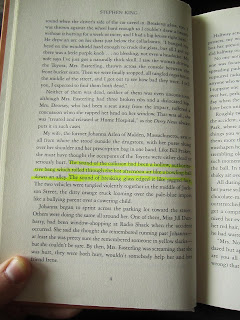 The good new is, I was able to get through the book just in time for the mini-series. I got home after eating dinner at a friend's house, I curled up on the couch, and I flipped on A&E, a channel I never have on. Then, as Pierce Brosnan traipsed around stage in his "return to TV" I realized HOW BORED I WAS! The dumb teleplay writer decided to take so many liberties with the story that it was ridiculous.

I hate it when writers take ANOTHER writer's work and take major liberties and changes up a whole bunch of stuff. The things that were changed didn't even matter and they should've been left alone.

Boo! I was also mad because I plowed through that book in vain.

I also decided that it shouldn't have ever been made into a movie. It was more of a book-book, not a movie-book, like, say, "The Girl with the Dragon Tattoo."
Labels: on writing reading stephen king