Bag of Bones by Stephen King 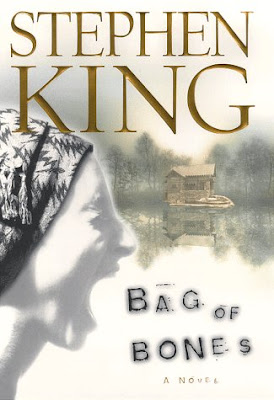 Not often do I re-read books. It's strange, but my memory for books is very strong. I can remember a lot of books that I've read, so it's difficult for me to re-read because it'd be like I just read the book. When I found out that "Bag of Bones" was going to become a mini-series on A&E, I decided that I needed to re-read it because it's one of the few books I didn't remember as well.

I picked up the 500+ page book a week before the movie aired and I don't think I've never read a book so fast (that's a lie, but I'm a slow reader). I wish I could go through more books at that speed.

Just to summarize briefly, we find author Mike Noonan after his wife dies. It's a sudden death, something he didn't see coming, and for four years after her death he doesn't write. Luckily, he's got already written novels stashed away to get published, but eventually he decides to retire to a cabin called Sara Laughs that he shared with his wife in Maine (always in Maine). We begin to find that the cabin could be haunted. Mike also gets involved, not by choice, with a young widow of a small child who is being sought after by her rich, and old, father-in-law. He wants the small child. But the ugly custody battle is very brief, compared to the rest of the story. There are a lot of ghost-filled dreams -- which is the "scariest" part of the book. In the end, Sara Laughs is haunted and you find out the tie between Sara Tidwell's past (whom the cabin is named) and a lot of the folks that live by the lake.

Having read some of King's older books, as well as most of his newer ones, I'm realizing that his style isn't necessarily IN YOUR FACE scary. Even the "The Shining" and "Salem's Lot" weren't campy horror books, but "Bag of Bones" does focus more on the characters and less on the weird. This is a theme in a lot of King's books, though. The weird is in the background.

I want to say that this is one of the first books critics called "literary" more than "genre." But guess what? I wouldn't have ever picked it up unless it had the haunted cabin. I need the weird, just as much as Stephen King does. And, if you've never read a King novel before, this might be a good one to start out with. It's not scary. There are thrilling bits, but you won't lose sleep. Unless you only watch Hallmark movies, then, well...

I don't believe this is one of those books that translates into a movie. Not every book can do that, and after reading this one and watching the first 1/4 of "Bag of Bones" on A&E, I wonder why anyone chose to make this book into a movie. Whoever was in charge of the screenplay took a lot of liberties and I just got annoyed. It wasn't following the book at all. I decided not to watch it. Mike Noonan was 40 in the book, not 60+ like Pierce Brosnan, and that's just the beginning of my complaints.

So, read the book, stay away from the movie.
Labels: book review