Quit being such a laxative! 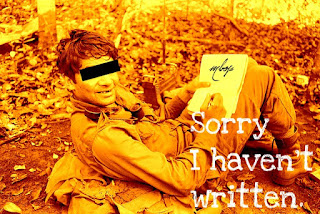 World-wide Interweb, it has been too long!

Have you missed me? Did you even realize I was gone? You probably have no clue I exist. It says this site has been visited over 9,000 times, but how many times has that been an accidental search by someone in China?

I'm a bore and not famous yet, but I'm working on that. In a very passive-aggressive way. As of now, those passive aggressive tendencies have been focused in a more aggressive sense by working my little typing fingers to the bone. I have joined many across the country in an attempt to commit to a novel during the month of November.

Ah, yes, National Novel Writing Month is upon us again. We are 9 days into it, and I have yet to pound out my 1,667 words for the night, but do not fret, my pet, I will be whittling away the story yet again in an hour or so. I think I'll eat first.

But until I do, I thought I would share an anticlimactic, but amusing teaching moment. It's like I've just put a platter in front of your face and I'm about to pull off that shiny-dome-lid-thing and say, "ta da!"

The latest tale is about the birth of a new insult. Now, I don't go around insulting my students because I'm mean. This is actually a "slam" that came about on accident. I told a few students last Friday that the day was going to be lax, as in relaxing, as in, not too stressful. Then, I looked at a student and said, "It sounds like laxative, doesn't?"

And then it appeared! My latest insult:

"Quit being such a laxative!" I yelled at my student, and we both looked at each other and started laughing hysterically.

"Can I write that on the board?"

"No! I do not need the principal to come into my room and see that!"

Oh, how my face was red from laughing.