My Bucket of Likes: September

If you're noticing that my latest update of My Bucket of Likes is late, it's because September was lame in the "likes" department. I had to scrounge for my likes. 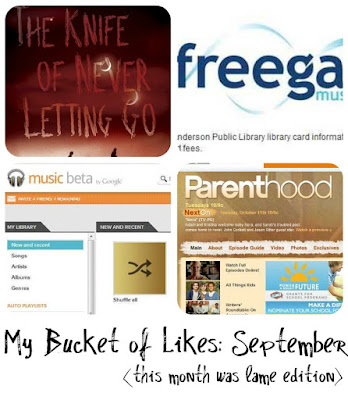 The Knife of Never Letting Go by Patrick Ness was a book I stumbled upon because the title was really weird. I mean, "The Knife of Never Letting Go"? If you read the book, it'll make total sense, of course, but the title, alone, got me. I also found this in the young adult section, which has become a favorite haunt of mine in the library. The story is written in first-person present tense (what I think is a very difficult voice to write in) and, even better, it's written in dialect. Because of the dialect, I wanted to listen to the audiobook version instead, and I did, for pretty much the first 300 pages. The narrator did a good job, but I couldn't take it anymore -- the narrator goes over board after awhile and he does so many dramatic pauses that it feels like I'm listening to "Atlas Shrugged." On the eve of giving up the book, I decided to at least give the actual book a try, now that the dialect was "invisible" to me. The story is about a young boy who is days away from becoming a "man." He finds out the town he's grown up in isn't what it seems, so he escapes. He also stumbles upon a girl, something he hasn't seen before, because all the girls/women have died in his hometown. It's a journey of friendship and trepidation, but it's also a little slow at times...and it was even slower listening to it. I made myself sit down and finish the book one Sunday at the library (so I didn't have to check it out) and by golly, I actually found myself really enjoying the book. I can move on now to the second novel, which I won't be listening to, by the way.

Freegal is a service that our library provides. Just by being a member of the library, I get access to three free downloads a week. Now, three downloads doesn't sound like much to you, I'm sure, but when they feature some of the recent albums I've been wanting from The Script, Augustana and Gavin Degraw (not to mention all the singles from Glee), why not wait a few weeks just to own an album? Sure it takes me a few weeks to get the entire album, but for free? I've been in love with Freegal for longer than just September.

Google Music Beta will someday open up their service to everyone and probably charge, but until then, I'm enjoying my own personal library wherever I go (for free). Sadly my new cell phone (already in the likes bucket for October) only runs Android 2.1, otherwise I would be able to stream my music from my phone, too. I can create school-appropriate playlists, or just listen to whatever album I want from my collection wherever I may roam. I know iTunes has that whole "sharing from computer to computer" function, but with Google Music, I don't need to turn on the main computer for it to work. And since I'm a PC and not a Mac, that whole iCloud-thing isn't going to work for me.

Parenthood on NBC is the only show on network TV (or TV at any point in personal history) that actually makes me cry. Me! I don't shed a tear, but every Tuesday night, around 10:45 p.m., yup, there I go. Stupid show! I bemoan. But I can't help it. It's so funny and serious and real without any of that terrible melodrama so many shows lather on. And, sure, I love some good melodrama (or zombies, so yeah, there's another hint to what will be on my bucket of likes list for October), but to see something so real? Amazing. Obviously it's a little hyped up...but for TV? Pretty realistic. I'm waiting for it to get nominated for an Emmy for best drama -- but as long as AMC shows exist, we all know that won't happen. Until then, I'll always be an honorary Braverman.

So, there you have it. The lamest Bucket of Likes list thus far, but you have to admit...there's a little heart in it, isn't there?
Labels: bucket of likes pop culture