The Knife of Never Letting Go by Patrick Ness 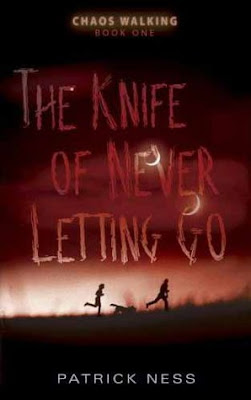 In this interesting take on settler's life (settlers of a new planet, not settlers out West), men and boys can hear the thoughts of other men and boys. Men, according to Ness, with the ability to hear thoughts and project thoughts, are just chaos walking. This is fabulous writing.

Written in first person point of view, while also using dialect, and using present tense  makes for some interesting writing. We find the main character, Todd Hewitt days away from becoming a man in his hometown of Prentisstown, which is governed by Mayor Prentiss. Boys become men in this settlement at about 13. How they become men and why it's a secret isn't revealed until the end of the book (but it's pretty guessable by the time you get there). Todd is forced to leave the town he begrudgingly calls home because something not-so-great is planned for him. You see, he's the last boy-to-become-a-man in the town. His dads, yes, dads send him off (Ben and Cillian, pronounced with a K) because they sense danger in his becoming a man. Here's the reason for the two dads: women and girls are not around in Prentisstown. Apparently, a horrible disease spread by the so-called Spackle left men's thoughts open to anyone and everyone, but the disease killed the women.

So, with whatever ruse planned by Mayor Prentiss in the folds, Todd runs from town, but while doing so, finds a girl in the swamp nearby. You see, while boys' and men's thoughts can be heard, girls and women's thoughts remain quiet, and since Todd has never met another woman/girl before, this drives him crazy. He is so used to hearing everything someone is thinking.

The two of them, Viola and Todd, with Todd's dog Manchee, embark on a journey, because they all come to realize that Prentisstown was creating an army to take over all the other settlements on New World.

Ness does a great job setting up tons of questions. He also does a good job of slowly answering them as you read, giving you the last few answers in the last few pages of the book. I am sold on this strange settlement tale that reads like it takes place in the old West, but in reality, takes place in the distance future on another planet -- and it's also nice because Ness doesn't spoon feed it to you. You just realize that you're not in a poverty-stricken part of the United States, but a poverty-stricken planet.

The one thing I didn't enjoy was the narrator. At first, I decided that I needed the dialect to be read aloud so I could hear it, but three-fourths of the way in, I couldn't take it any longer. You see, there's a pastor in the book that's bat-pooh crazy. He is, for most of the book, after Todd and Viola. Every time the pastor finds Todd, the narrator yells out, "TODD HE-YOO-WITT!" And the narrator does this voice every time and it becomes unbearable. I physically could not listen to it anymore without getting sick.

So, I went old-school and just finished the last 100 pages in tangible book-form. After escaping the narrator, and allowing myself to skim through some of the slower Todd-Hewitt-talks-to-himself-inner-monologues, I really enjoyed the book. We'll see if I give the second book a try. It has a strange name, too. "The Ask and the Answer."
Labels: book review