A story that involves a typewriter 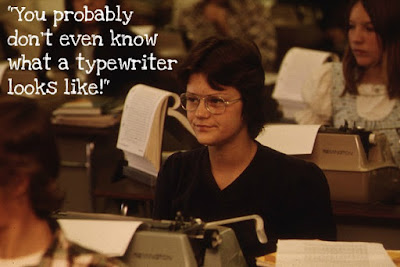 Stop me if you've heard this one before:

Years ago, back when I lived at home, I helped out a photo/computer session for my mom's Purdue ladies group. I don't remember what it was I was doing, but it was with my laptop. At first, while getting things set up, I was typing really fast and some of the women were all, "I don't even know if I could turn the thing on..."

This was before iPhones.

I think there was a comment about my fast typing, I can't remember, but there was a woman there that was full of everything dreadful you could think of. As I was typing, she was talking to me, but very loudly so everyone could hear her make some kind of non-point.

"I learned how to type on a typewriter," she said, trying to age herself in front of the other woman (something I still don't understand). "You're so young you probably don't even know what a typewriter looks like."

I looked straight at her and told her, "I learned how to type on a typewriter."

She stood, tore off her face and standing in front of me was a wicked witch. She pointed her bony fingers at me and screeched, "No boy like you defies me!" She started making over dramatic hand motions as she started casting a spell when one of the woman shouted at her:

"Karen, sit down and shut up."

The smoke that started whirling around her sank to the floor. She bent down and picked up her sad, prosthetic face and sat down on the couch, practically putting her head between her knees. She reached for the bean dip and started eating in quiet.

OKAY! Okay. That's not exactly how it happened, but after re-reading it, I realized it was really boring, so I had to do something to spice it up. The woman at the party never told me that I probably didn't know what a typewriter looked like...