My Bucket of Likes: August 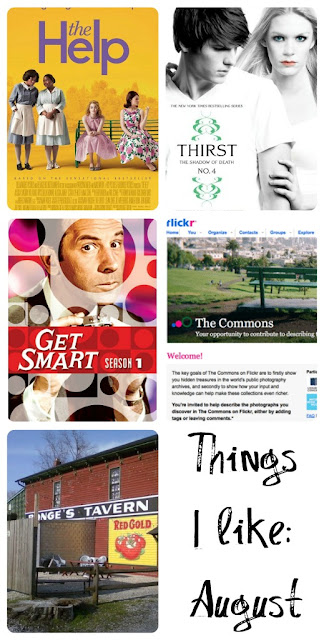 I had to think for August. The month went by both slow and fast. Now that I'm 30, I guess it's a written law somewhere that time speeds up. I need one of those belts that's made from a seat belt so I can always be buckled in.

The Help. To laugh and cry (I didn't, but I heard sniffles in the theater) during a movie is one of the best things. I can't say enough great things about the cast in this movie. The women that played in each of the rolls did a phenomenal job, made me believe, made me feel with them and I commend them. I would sit through this movie again and again. I also like that it brings to light the Civil Rights movement to a different generation.

Thirst No. 4: The Shadow of Death.  I know the cover looks like some sad teen thriller cover, but if you put the cover away, realize this series of stories started back in 1995, and knew about Christopher Pike as an author, you wouldn't judge. Not that you're judging. I'm just being super-defensive because I always have to defend things I like...especially when they involve vampires. Or vampire slayers. The series, when it first came out, was originally "The Last Vampire," but due to the insanity that was/is vampire novels, HarperCollins re-released it under a new titled "Thirst." Originally there were only 6 books in the series that fit nicely into "Thirst No. 1" and "Thirst No.2." Now that the story's been finished for 15 years, Pike has opened up the story again with two additional books. Did the original 6 end well? Yes. Did Pike really need to continue the story? Not really. Will I ever criticize these books? Never.

Get Smart. I love Mel Brooks. I have not seen all of his movies, but I love the idea of spoofs. I was amused to see the first disc of season 1 was our latest Netflix DVD. Was it a bit corny? Yes. Was the color totally weird since it's from '65? The color red was neon, people! Would you want to watch it on an HDTV? Probably not. Regardless, it's amazing to see what TV was like back then compared to now. I should probably get into more older sitcoms. Plus, they're only 20+ minutes, so I'm not devoting too much time to a certain show.

Flickr: The Commons. I love to see designers use old photos, but I always wonder where those old photos come from. This past August I was doing more design work and to have fun, I randomly used Flickr. That's when I stumbled upon their Commons section, a bunch of copyright-free (as far as anyone knows) photos that you can use. I have made use of old fair photos, random people at a party, and a family picture. By adding those nostalgic photos to my designs, they're funny, and sometimes, ironic. I know Flickr's been around forever, and my intention was never to join, but there are a lot of great photos out there that I can also use because of Creative Commons.

Bonge's Tavern. Located in Perkinsville, Ind., Bonge's Tavern has been around since 1934. It's gourmet food without the gourmet atmosphere. The menu's written on a chalkboard above the bar and it's not very cheap... The only problem is, if you don't get there really early to reserve your spot, you're going to wait for a long time. We went and waited about 4 hours out in the parking lot, but you can tailgate while you wait. Everyone brings their chairs, some people bring a TV table with snacks, and we all wait until we get a seat.