A case of coulraphobia no one can escape 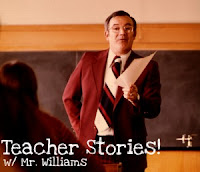 This post was originally written/posted Oct. 22, 2004. I'm re-posting because I have a lot of old content you haven't seen. This is one of my favorite stories from my first year of teaching. My students came into my classroom and began telling me how a clown was lurking in Carmel, Ind. homes. They started talking and I started writing down everything they were saying:

Apparently there is a clown living in

But this isn’t any ordinary clown, according to one of my middle school students. Living in the fruitful heart of , there is a clown that hides out in people’s houses.

The basement to be exact.

I spoke to a coach on the way to CPR class (in case the clown attacks, I am now certified and can save your life – stay back, you…clown!) and told her what my student had said.

“Have you heard the latest?”

“Well, apparently there’s a clown that had been living in a person’s house for two weeks and then the clown killed the infant late one night.”

We continued to talk and I started laughing at how ludicrous the story actually sounded, I mean really, a clown?

“Honey, I’m going to go downstairs to get a new bottle of wine, I’ll be right back,” and the husband vanishes into the vast darkness that stretches out (called the basement) and searches for the light switch like a blind man reading Braille. The light flicks on and he looks around the unfinished basement his wife has been nagging him about. The cold gray cement floor sends shivers up his legs and boxes are here and there, as well as visible pipes and dank, old furniture the color of nature (i.e. browns, dark greens, blues) and he walks over to the makeshift wine rack and picks a bottle of Merlot, his wife’s favorite.

So, if there’s a clown hiding out in this man’s basement, the word incognito comes to mind – and, no offense to clowns, they really don’t have it going on. I mean, all that bright orange hair, luminescent white make-up, red lipstick that goes beyond the actual lip vicinity and giant blue shoes. Don’t even get me started on the collar around their neck that looks like a dog tutu…

Unless the husband was severally colorblind, then there would be some issues. All I picture is a clown cowering in the corner of the basement, hiding with his white-gloved hands covering his head like a little kid ready for a severe weather drill in grade school.

And with that scenario in my head, I laughed and realized that middle school kids were just too gullible to believe a story like that.

Which makes the story even more reliable.

The babysitter’s story goes like this: The two small children were always afraid to go to sleep because of the clown, and so the babysitter called the parents to ask “what’s the deal?” and the parents said that there was no clown in the house.

The kids told the babysitter that the clown hid in the basement and came up at night and watched the kids while they slept.

Although clowns are their own subspecies and should be extinct within the next 40 years, and they are the reason for sever cases of Coulrophobia, but such a bizarre story would’ve been on the news, all over the papers and a photographer would’ve definitely won a Pulitzer for covering the scary basement clown.

I can’t wait to hear the next suburban legend that’ll pop out of my students’ mouths.
Labels: teaching