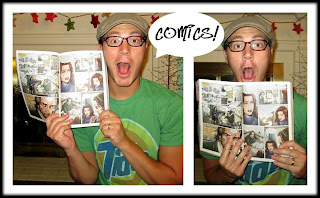 I've only recently gotten involved with graphic novels. Or comics. I was never one to read them because, well, where do you begin? There are so many different stories and brands and heroes and villains and story lines and volumes and editions. You can't just pick one up because the one you pick up is right in the middle of an on-going story. Have you ever turned on "The Young and the Restless" and actually got what was happening?

Plus, the way they're designed is a bit daunting. All those shapes with pictures in them. How do you know which order to go in? And the dialogue bubbles...how do those work?

Plus, I just never thought to read them. My comic book extent was collecting Marvel Hero Cards for several years (I started when I was 10). I also watched "X-Men" on Fox when it was a cartoon. After that, the super hero movies started coming out and after getting annoyed with the "X-Men" movies, I just gave up. Did you see X-Men: The Last Stand? It was total poop.

I was finally led down the path of comic books and graphic novels when a bunch of stories I was already invested in began to enter the format.

Stephen King entered it using his Dark Tower series, and years after my favorite TV show ended, Joss Whedon went and helped create an eighth season in comic form. I have since read parts of both. I think it helped that I knew the characters well. It was like comics in training.

A few years ago, a friend of mine told me about a series called Fables, where fairy tales are in exile. Interesting premise, I thought, and even more interesting? My library carries the series. While my brother-in-law got his gall bladder removed this past holiday season, I took the volume one with me and read it rather quickly. I decided that I liked it. I just finished volume two, and now I'm on to volume three.

It's like a great TV series in book form! And anything can go!