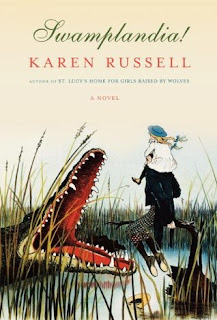 Do you want to read a book that makes you want to chuck it across the room? Then, read this. And as you're reading, you'll hear a loud noise: the sound of a train wrecking.

I don't think I've ever read a book that I disliked so much as a whole, but loved the language. For the most part. I had to force myself to finish it.

Reading the book was like drinking barium sulfate before an upper-GI exam. It's a thick, horrible concoction you must drink in order for the doctor to see your stomach during a CT scan.

Karen Russell, author of "Swamplandia!", used gorgeous language and words that I didn't even know. I felt sheepish. What I did I learn from this book? Get a notebook and write down hundred-dollar-words in it. Then use them. And sound...adept.

What I didn't enjoy? Everything else.

Reading the plot synopsis made this book sound like it had a "magical realism" spin to it. That's why I wanted to pick it up. I thought alligators talked and a girl went on a mystified, but grounded, journey in the swamp lands of Florida to search for her sister. Doesn't that sound good to you? Me, too.

Too bad I was way off.

We learn about the Bigtree family. This family owns and operates Swamplandia!, an alligator theme park. The story is mainly told from the first person perspective of Ava Bigtree, a 10-year-old girl who is following in her mother's footsteps in becoming an alligator wrestler.

Sadly, though, her mother has died of cancer. And, on the mainland of Florida, The World of Darkness (this Leviathan of a theme park) has opened and the absent mother and new theme park all but kill Swamplandia!.

The story isn't necessarily about Swamplandia! but the family and how they try to overcome the heaviness that is their lives. But, while we're learning about the lives, we also learn a lot about the swamp lands of Florida. Some of the history is magnificent, but most of the times it weighs down the story. And Russell keeps...on...going. There are quite a few parts in the book I skimmed. It was like she was saying, "Look, I did all this research and I'm not quite sure what to do with it, so I'm going to stuff it in here. Look how much research I did! LOOK, I DID RESEARCH! RESEARCH!"

Ava's mainly a positive little character (until something horrible happens to her toward the end of the book, go figure). We learn about her sister, whose name is all bizarre, nor can I remember it right now -- oh wait -- Ossie. She finds a book about being a "spiritist" and goes on dates with ghosts, or so she says. She just gets weirder and weirder, but not in a a magical realism kind of way like I thought the book was going to be. She got weird in a sad, mental health kind of way. The type that needs a psychiatrist and medicine.

The brightest of the family is Kiwi (I know, right?) and he gets angry and leaves the island to find work to help make money for the Bigtrees. This doesn't happen well because in order to work at The World of Darkness (yes, he goes to work at his nemesis), the Walmart of horrible theme parks, he pays rent there and has a meal card and that takes up more money than he can save. He winds up meeting a bunch of social losers he calls friends. We read about his annoying adventures.

We switched back and forth between Ava, written in first person, as she searches for her sister, Ossie, who's up and left with her ghost finace, and Kiwi, written in third person, as he stumbles through life on the "main land."

A friend of mine said she felt that Russell lost her way while writing this book. I agree. I think Russell got lost and drowned in the Florida swamps and dragged the reader down with her.
Labels: book review