It's going to take a lot of spit... (Or, "I use a lot of dead body metaphors when I talk about writing") 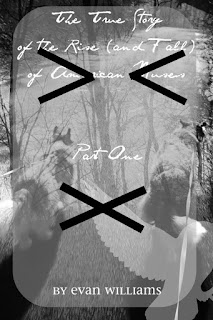 I started reading my first draft of the book today. My goal is to read the whole thing before I dig into draft two. I know that there's so much I have forgotten, that I need the brain refresh. I knew that it wasn't going to be easy adding, cutting, changing and rewriting, but what I've read so far is tangled mess.

Apparently, I'm wrong. I think I need to go back and add, add, add.

I knew there was going to be holes in the story, but these are  craters. Gaping craters. I almost couldn't crawl out of one of them. It's going to take a lot to fill in the rest. This I don't mind. I'm actually kind of excited, because now that the skeleton's laid out on the table, I get to be like Dr. Brennan from "Bones" and figure out how it died...

Eeesh. That's how it feels right now, though.

I am excited, though. But, the reason for such a messy first draft was my "writing and no editing policy" I adopted.

The goal, even though it took me a while to get here, was to write, write, write, no editing allowed; plow through and (as they say) get it all out. I've read writing books and articles that say, "You can go back and edit later." I liked this mindframe and felt that it suited me. During the process of writing my first book, I edited so much that it lost steam. I would write and rewrite the first parts of the story so much that I neglected pushing the story forward. It died a slow and painful death, and finishing it felt more likesticking it in a coffin and burying it. I may exhume the remains someday, but first? My current project (it's alive and kicking)!

For me, the hardest part is finding the discipline to just write the bones of the story down. Since I'm happy with where it's going, now I get to flesh it out (as they say). Since I haven't done this part of the process before, I don't know how difficult it will be. I just know that even when I think I'm finished, I'll need to go back some more and keep writing and rewriting. More spit, more polish.

But before all that, here's a small example of the mess that spans before me:

One of the characters in the book is named Jennifer. Luckily, as of late, that is how I have remembered it;  if she was mentioned in the latter part of the book, she was Jennifer. Sadly, that's not the case in the middle. Somewhere in the middle, Jennifer became Cassie.

How on earth did a she become a Cassie?

This is going to be harder than I thought.
Labels: on writing TSRFAM