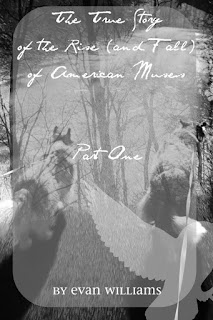 Sitting at a coffee house yesterday, which was really warm, actually, so it's a good thing I had an iced coffee, I wasn't expecting what happened.

Even if he was hiding out in Noblesville, Ind., everyone would be throwing rotten fruit and vegetables at him. He would've gotten a face-full of iced coffee from me.

It would've played out like a soap opera on Telemundo.

No, that's not the unexpected that happened. No famous person walked into the Noble Tea and Coffee Company while I sat, consumed by my writing process and clicking away at my laptop. Ferociously, I might add. I was nervously excited while I wrote yesterday. And you do want to know why?

First, lets take a mind-trip back in time: Before starting out on this most recent summer break, my main goal -- other than being a phenomenal housefrau -- was to finish my book. I knew it was getting close and I wasn't sure how long it was going to take, but my goal was to hunker down and finish it so I could begin the next step with it.

I didn't realize I was going to meet my goal the first week in: Sitting at the coffee house, I was writing the tale-end of my book. I knew it was coming, and I was getting excited because the writing process has been high energy lately. But I thought it was going to be later. So yesterday, as I was stringing together the few different scenes and ideas, I realized I was actually setting the stone work for the final scenes that have been inside my mind for so long.

I have known how I was going to end the story before I even started writing it. I've been seeing it play out in my head over and over again. But to finally get to the end and write it? Of course I was shaking. It was like I had visions of the future and I was seeing it come to fruition.

So, without trying, I sat there for about two and a half hours finishing the first draft. Steph was at work and I was waiting for her to call and tell me she was done, but I kept looking at the phone saying, "Not yet! Don't be done, yet!"

After I left the coffee house, I was on a high for about an hour after -- then reality hit me. It's only the first draft and there are some major issues with it that I'm going to need to sort out.

Here's the embarrassing part: After about three years of writing this, I have forgotten characters names and some important scenes and some characters even started to "write themselves out" as I realized they were no longer important to the plot. Then I came to the realization that I wasn't writing an adult novel, but a young adult novel. I noticed that about half way through. Oops.

There's a part at the beginning of the story that's not exactly the right fit for a young adult novel.

Before I stick my hands inside this mud pie that I've created, I've decided that I should probably just read the whole thing before I do anything else to it. With the help of technology, I created a simple cover, formatted it and placed it on my Nook.

So, if writing it wasn't hard enough at times...I think I'm about to begin a journey that's a bit more gruesome than getting all the ideas out on paper. Now, it's time to spit and polish.

And I've got a feeling it's going to take a lot of spit.
Labels: on writing