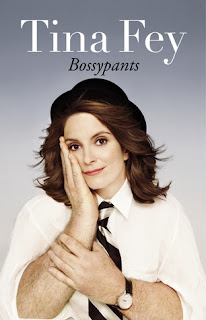 When I found out that Tina Fey was coming out with a book, I knew that I would get to it...eventually. She's popular. I didn't plan on buying it. I knew it would be a while before I would get a copy in my hands. And then, I came across the audio version (in the Playaway version) and I'm glad I never had to actually read it.

Listening to it was the only way to go.

I'm a fan of Tina on "SNL" when she did Weekend Update because of how she read the news and delivered her jokes. She was always so dead on. Listening to her perform her book was very similar. I have decided that if I ever turn any of my humor writing into a book, I too will read it myself and perform a la Tina Fey. I think humor writers should always be the ones to read their own work in audio form because they know exactly where the beats are, the pauses, the voices, etc.

"Bossypants" was a joyous romp through some of the main points of Tina's life. With her self-depreciating humor, she highlighted growing up with a Greek background, going to acting summer camp, what it was like to live with a bad ass father, working at Second City, SNL and 30 Rock. When she gets to the 30 Rock part, she gives way too much credit to Alec Baldwin on the success of the show (and although he's great on it, the show wouldn't be what it is without her).

I think what I liked most was her attitude. Her writing would come across with no apologies, and then she'd apologize. I loved it. It wasn't like that at all times, and when she had a major point to make, she didn't back down. Her humor is also out-there. While sharing parts of her life, she would throw in some lines that were so random and obviously hyperbole that I would laugh out loud. I think I actually found a very similar style in my own writing while listening to hers. She'd go on random tangents at times that were simply bizarre, but too funny. She would quietly read her use of parentheses, like they were side notes. At times, her quiet reading of the parentheses were almost too fast and too quiet, so I couldn't catch the joke.

Just don't drink or eat while listening to this book (especially if you're driving). There were times I had to quickly chew my food in lieu of choking, because I knew that I was going to laugh. Or, I had laughed with food in my mouth and it wasn't a good idea.

If you're familiar with her stints on SNL and 30 Rock, you will enjoy the latter half of the book that much more. Especially all the times she appeared as Sarah Palin. She makes it sound like that character role was one of the pinnacles of her career because people were choosing to watch SNL because she was on it. She felt that for the first time, people were tuning in to a show because of her and she really loved that. It was also interesting hearing about the "drama" that played out because of her Palin impersonation.