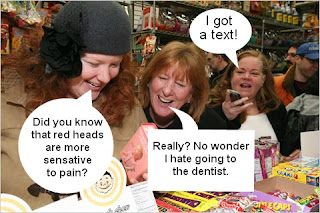 While waiting for my red-headed sister-in-law to have additional surgery because of her appendix, I just learned that her kind of people need more anesthesia.

The anesthesiologist said this and I wanted to be all, "Ha ha, because red heads are always the butt of a good joke about their temper since they're hot-headed and all that..."

My sister-in-law is a science genius and agreed, saying, "Yeah, I've heard that." The anesthesiologist was serious and I could tell just by looking at him that he had his serious face on. I know when you put on a serious face and mean it.

Like, when your parents see you doing something you shouldn't be and they strain their faces (after they have, apparently, told you a million times to stop it already) and say, "This time I mean it!"

That's the face the doctor had on. This time he meant it.

So, because I'm in the waiting room and because I just-so-happen to have my laptop with me and because hospitals come equipped with free wi-fi, I decided to kick my legs up into Indian-style and do some research.

Well, okay, I did a Google search, and found an article from the New York Times. Although I could reiterate all the different reasons it is so, I don't understand half of what I read. Something about melanin. And something else about red heads and their inability to handle Novocain at the dentist. And a gene mutation.

So, if you're red headed and fear the dentist, you're not alone. This is common. It's not that your dentist likes to make you squirm or that they like to watch you suffer (dentists do have souls), it's because red heads need just a tad bit more Novocain or anesthesia than anyone else.

That and you burn faster in the sun because of your fair skin.
Labels: fun fact random