"The Passage" by Justin Cronin 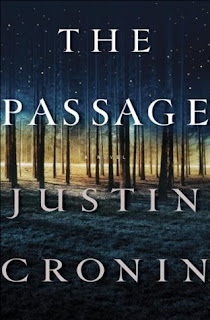 I didn't know anything about this book. All I remember reading about it is that it was kind of like a weird spin on the vampire novel, but not really. Then, after that, mum was the word. Except for the buzz the book received.

OK. So, it sort of has vampires in it, and people like it? Well, of course I'm in. Not because vampires are the trend. Please. I've been reading vampire stories and loving on the silent film "Nosferatu" since I was a baby. Stephenie Meyer and her romance-kinky-vampire-garbage can kiss it. You too, "True Blood."

I'm not sure why I waited until NOW to read it, since it's been out a year. I could've easily gone to my library and picked it up. Ahh, yes, but you see, the library can charge you if you forget to return the book. And for some reason, I'm that person. Always a fine. I keep the library in business.

I think I decided to read it now because of my Nook. My library allows eBook downloads and the Nook is library book compatible, and since I saw that was one of the books I really wanted to read (insert drool here), I made sure that was the first one. Plus, no fine.

That's fine with me.

Now, please realize I have never physically seen this book. I've seen the pretty digital cover. I read the tag line how "It took 32 minutes for one world to die, another to be born" and went gaga (not like Lady, thank you. I don't wear meat dresses).

After the download, I looked at the bottom of the screen and saw that I had 829 pages to go. Since there are no pages to turn, I need to translate my book reading, now, into clicks. Since each click forward is about 1/2 a page, the book was really 1,659 clicks long.

What? But. But. But. That's sooo long! I'll get carpel thumb-el!

And then I plowed through the first 250 pages, screaming all the way. The first 250 pages (as you might read on any other amateur review) were some of the scariest fiction I have ever read. I'm sorry Stephen King. They totally were. I mean, you're stuff is always engrossing, and you know I'm a fan for life, but this Justin Cronin knows what he is doing.

Like, I almost had night terrors. Just like when I found out Donald Trump entered the rumor mill about running for president.

We find out that the government finds a strain of virus that they realize could create a superhuman soldier. They find 12 inmates on death row and give them a choice - die by lethal injection (or...um...live forever as a blood-thirsty, virus-infected monster...pick me! PICK ME!), and since this is apocalyptic literature, of course this isn't going to end well, not when we have "32 minutes to end this world" and start a new one. The inmates become these other-worldly creatures, very humanoid, but they approximate nothing of their previous existence. They also like to feast on blood. That's the only vampirc similarity. And they have a bio-luminescence.

Such a cool word.

As we lead up to the end of the world as we know it, I began to fall in love with the characters. The FBI agent who is in charge of gathering the inmates is then sent to find a little girl who (suddenly) has no family. It's time to inject this little girl with the virus, too. And the bond this FBI agent (who has lost a daughter, we find, in flashbacks) forges with the little girl is believable and heart-warming. The 12 inmates get out, but the little girl and the FBI agent escape and find refuge for many months in a cabin in the mountains, making-do. There are some other characters and important things from the first 1/3 of the book, too, but since I don't want this post to be 1,658 clicks long, I'll keep it short.

Once I got through the first 250 pages, catching my breath, I come to find that there is war happening all around their mountain top, and the last few scenes are of a nuclear bomb going off and the FBI agent dying from, not the crazy virus-monsters, but infection from glass that got embedded in his leg. Or, so we think...and then after a few random parts, we're catapulted 100 years into the future.

We get some weird journal entries in Part II or Part III. A weird slideshow about stuff, like it's part of a conference that was talking about what life was like. And then, we arrive in California, with an entire colony of new characters. Literally. From pages 300+, we are to learn about all these survivors in the future, how this horrible new world is the only world they have ever known. It's like we're reading this entirely new novel, but not really, because we know something they don't: how it started.

I totally wanted to go in to the book and be like, "OK people, this is how it happened. Bear with me."

There are people out there comparing it to "The Road" by Cormac McCarthy, which I might agree with. But, whereas "The Road" is so gray in description and despairing with almost no hope, "The Passage" is luminous with it's descriptions of the West with hope just around the bend. And of course, it was compared to the other apocalyptic whopper "The Stand." While there are similarities, it really reminded me of AMC's "The Walking Dead." I have not read the comics/graphic novels, but I fell in love with the zombie TV show.

We're on a journey in this book. The characters begin to look for hope. There's some fun supernatural stuff. There's also good relationships and believable accounts of being human. Then, the story just kind of...ends.

I was pleased with the ending because using my powers of assumption, I figured what would happen next. Then I stumbled upon news that "The Passage" is actually the first book in, probably, a trilogy.

I wonder if the other books will be 800+ pages. I wouldn't mind. My carpel tunnel wasn't aggravated since I was reading it on my Nook and I could read it with one hand, instead of five.

I look forward to "The Twelve" that is supposedly out in 2012. Just in time for the Mayan calendar to end...