Everything but the kitchen sink... Part II

Two weekends ago, my dad came up to help me figure out the debacle that was the Kitchen Sink Blog of the Century. We started with going under the house. The goal was to undo some "cap" that would allow us to put a snake in and stab at the clog (see fig A). Well, there was no cap, and if there was, it was rusted shut.

So, we went and bought a better pipe snake (the Walmart one I had just wasn't doing the trick), but it didn't want to snake through the pipe. Saturday night, Steph and I went grocery shopping, so we bought Liquid Plummer Foaming Pipe Snake. We poured it down the drain, but nothing happened. Well, that's a lie. It did clean a section of my sink that I can never get clean. I undid the pipes again, and decided to put some more baking soda and vinegar down there.

Well, that wasn't smart, because there was some bleach in the Liquid Plummer, and when you mix bleach and vinegar, you get a nice little chemical reaction called chlorine gas, or hydrochloric acid.

Deathly gas in my kitchen, what?

Steph was researching, making sure nothing was going to explode or kill us, but she started searching after I poured the vinegar down.

I should have waited, but you see, I have this issue where I can't leave well enough alone. If something is wrong, and I want to try and fix it, I dwell on it.

So, once Steph read that it creates a gas that is far-from-healthy, my hypochondria begins to make me flush and sweat, especially after she said that vinegar and bleach make chlorine gas. Which, I could've been breathing in. Maybe. Am I dying? Is that a tunnel of light I see?

No. Just the large light we were using under the sink.

We did learn, the "taking lemons and making lemonade" aspect of the story: the best way to get a hold of poison control. (The number is now written on a magnet and posted in plain site if we'd ever need it again.) The man on the other end said I would've noticed any side effects instantly, from a burning in my eyes, nose and throat. Since none of that happened, he said we were safe. After that, I said, "I'm letting a plumber deal with it."

I was at peace with that, and finished doing dishes Sunday night with my make-shift sink (my 5-gallon Menard's bucket filled with sudsy water, see fig. B).

Then, Steph's dad called and told us about sticking a hose down the main pipe under the sink. It was 8 p.m. Sunday night. I really didn't want to do this, but knew I had to suck it up because if it worked, it would save us money. Plus, I would feel a little more awesome for solving (with help) the Vexing Kitchen Sink.

He said if we could get hot water in there, not only would it help blast away whatever was down there, but it would also melt it a bit, too. The cemetery of food corpses would melt away like it was 2012. Just like John Cusack's movie career...

Getting the hoses out of the shed wasn't pretty, but once we figured out that hooking up a hose to our water heater spout was our best option, I jerry-rigged the hose in the pipe with old t-shirt strips so it wouldn't leak water, and so the hose wouldn't bust out spraying water everywhere. I had gloves on, and while I held the hose in place, I was ready for the clog to kick back the water and tell me, "Hell no, I ain't goin' anywhere." Similar to those mucus families seen on those Mucinex commercials.

Instead, hot water leaked a tiny bit out of the t-shirts (they caught most of the drip) and after about 3 minutes total, the hot water continued to flow out of the hose, and there was no pressure coming back from the pipe. We cleaned up (not without taking pictures and posting them on Facebook) and I turned on the faucet to see if it was just kidding.

The joke was on the clog. 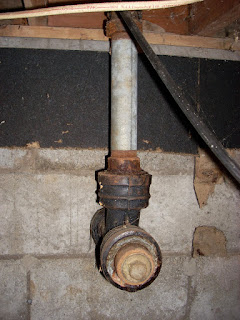 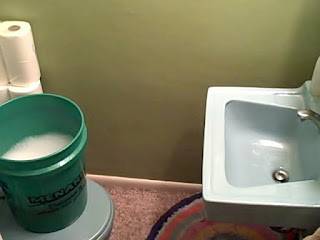