"The Vampire Diaries" by L.J. Smith 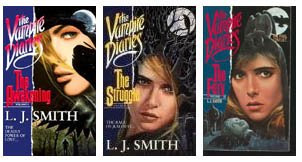 Long before Edward and Bella's love story made young people swoon from the "Twilight" series, there was an author making love to the page with horror-romance eons before: L.J. Smith.

I have owned these books for a while, and I still have all the L.J. Smith books I bought as a teenager, but I hadn't read the "The Vampire Diaries." I'm not sure why not. Last summer's marathon event of "Twilight" made me realize that it would be fun to read more horror-romance.

And even better, they're from the 90's, so the characters have narrowly escaped feathered hair, tight-rolled jeans, and poofy bangs. They're still wearing blouses with jeans, however. I'm sure their jeans snap, too, instead of button. I'm also thinking the characters like to rendezvous with their high top sneakers, and their tapered jeans, when no one is looking.

So, yes, these books were published in the early 90's, long before Stephenie Meyer had her dream about vampires and started writing them down.

We've got Elena, who's a heinous b-- , at the beginning of the series, but she has her loyal friends, Bonnie and Meredith, and she becomes drawn to the new boy. Always the new boy, isn't it? Someone is always new in these vampire-romance books, right?

"Ooh, he seems to be European!"

The Awakening. The first book in The Vampire Diaries started out a little slow, but picked up. Lucky enough, it's such a fast read, that before my first night of reading was over, I was already on page 165.

I read Night World and The Dark Visions Trilogy when I was in high school, and I enjoyed the romance + horror aspect. The love they feel in these stories is just so intense and it's all or nothing and totally unrealistic. Now that I teach middle school kids, that's just how it is with them. It is all or nothing with that age group. Throw in the supernatural, tough choices, and things you can't tell adults and then you've got a whole reasoning behind "Buffy the Vampire Slayer."

Of course I'm going to keep coming back to stories like this!

I think my favorite part about this series so far is that Smith is going where Meyer did not. There's tons of blood in places. There's a really mean vampire out there that's not afraid to be mean (unlike the PC Volturi). It takes place in a town called Fells Church, where the ghosts of the Civil War haunt. There's a cemetery that's visited often in the first book. There's ominous fall weather. There's a big Halloween sequence. Sure, some of those places are very cliche, but isn't that why we go back to certain stories over and over again? That's why the romance genre lives on -- the formula works.

It's the same thing with certain horror pieces -- it's spooky, it's a little bit cliche, but it's a formula that works and that's why we return to it.

The Struggle. "The Vampire Diaries" continues on in the second book to create the guilty pleasure it is. It's like L.J. Smith threw the contents of the first book in a blender and put it on high! By the end of the book, it's such a fast whirl wind that you can't help but fly through it, wondering where it's going.

The brothers, Damon and Stefan, continue to act like a-holes to each other. Elena is still dreamily and unrealistically in love with Stefan. Smith continues to force Damon on Elena. This part is even more unrealistic because Damon comes out of nowhere and just decides he'll have Elena because Stefan wants her. This is a little brash, isn't it? The only pull is their attraction to each other. Why turn some girl into a vampire when you hardly know her? Just based on hormones? That's sooo high school. Damon could've totally found Elena to be annoying. Just to "get back" at your brother, whom you're not even sure why you hate him in the first place?

The minor characters of Bonnie, Meredith and Matt continue to shine. They wag their tongues in the direction of Elena, doing anything for her. And they continue to trust Stefan, but they're not sure why... We all need friends that would do our bidding, regardless.

But, I'm not reading these books because they're seeped in realism. I'm reading them because cheesy vampire novels are my guilty pleasure. They're also a lot more gorier and scarier than the Twilight series. And the romance parts last only a paragraph or so, not ten pages a piece.

Technically this is a trilogy, but I'll be looking for the fourth book. That's what you get when you (can't say it and spoil the book), and then make rabid fans mad.

Reading this book was like pushing fast-forward. The minute you open it, you can't put it down until you know what happens and it's finished.

The Fury. There's something bigger, badder and more eviler haunting the small town of Fell's Church, VA. What is it? The Undead and Alive join forces together to figure out what's actually giving the town a run for it's money. Is it the Vampire Brothers?

People aren't what they seem in this book, and major explanations happen tying up any loose ends Smith created. Just like any trilogy should have -- it ends in a neatly tied bow.

I hope I don't pick up the fourth book later and have it completely RUIN the story.