"A Lion Among Men" by Gregory Maguire 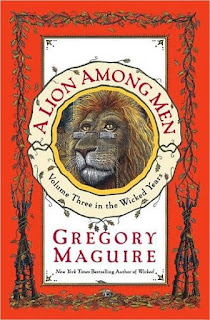 It's been a while since I've sat down to write a review of a book I've read. I've got about seven to catch up on.

Gregory Maguire returns to Oz with his third installment of what is now going to be known as "The Wicked Years."

I'm a fan, so it's not hard to please me. Looking back, now, however, I think I like this book the best out of all three. It tied the other two books together to make them "fit" with each other. I think Maguire felt the need to do this, instead of them just being mere sequels, because if he's going to call this series "The Wicked Years" they should fit together, right? I think that was his thinking... I've got a feeling he's got more up his sleeve, but in order to do so, he wants the books to feel more series-like and less sequel-like, if that makes sense.

In a series, you know there will be more books, and they're comfortable to get back into, but with sequels, who knows what the other has up his sleeve. I think Maguire would like these books to fit seamlessly together, now, and I think this book was written, with some repetition from the past books, to do just that.

"A Lion Among Men" actually follows two characters, however, and not just one. We have Brrr, who's the lion, and then we have an oracle named Yackle. We learn about both and why they were important to either Elpheba's history or the history of Oz.

I enjoyed Maguire's take on the cowardly lion because, just like Elpheba, it was a misconception. He kept being at the wrong place, at the wrong time, and chose poorly, therefore labeled a coward.

I read many pedestrian reviews of this book, because I'm always curious to what others think, and many were annoyed that Maguire used such complicated language in this book. There are many sentences in there that threw out three words that I had never seen before, but I loved that. I sat with my iPod Touch Dictionary App handy so I could type in the word and see what it meant. You don't have to dumb down your language, as a writer. People need to up their vocabulary. There are hundreds of great words out there and we're all stuck using the like, totally, you know and littering the English language with unneeded garbage.

It's a shorter read, reaching a little over 300 pages, but Maguire leaves it open in the end to continue his journey down the yellow brick road, but who knows through whose eyes we'll be seeing Oz next time.