The highs of Japanese culture consists of just a few things. Manga (which are their versions of graphic novels) and Anime are not among them. Japanese teachers aren't either. There has been only one Japanese teacher (an American teaching Japanese, mind you) that has been cool. The others were a bit off. One was adamant about not being in the yearbook. His response to having his picture taken?

I mean, who doesn't want to be in a yearbook? If you're not, it's like you've never existed...

But the highlights are things like Most Extreme Challenge, a show that used to be on Spike TV. It took footage from Japanese reality shows and went wild by dubbing over it and made up team names and dialogue. It was hysterical. So, OK, it wasn't really a Japanese show... It's actually making fun...

The other highlight is my new favorite character. Domo. He's the mascot for Japan's NHK station. He appears in stop-motion shorts inbetween shows (kind of like NBC's "ding...ding...ding" song they have going on recently between shows). He can appear in stop motion all over my world, if he wished! 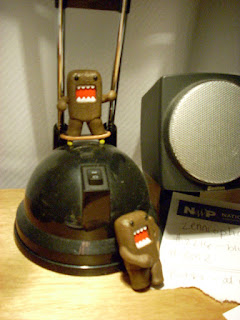 He's already taken over my world. Sadly, Gary Larson stopped "The Far Side" calendars...so I had to find something different. Domo is now on my wall as a monthly calendar.