"Marley and Me" by Josh Grogan 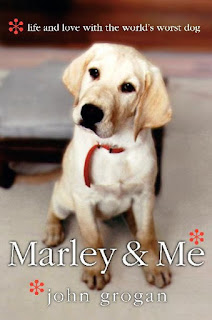 Steph said that I couldn't see the movie until I read the book. So, during the holiday break, I read it, knowing that I wanted to see the movie sooner, rather than later.

Basically, if you're an owner of a pet, especially a dog, then you will be able to slightly relate. If you owned a dog that has ruined your porch, or another dog that has escaped her cage and when you got home the living room was terrorized with books torn up and terds everywhere -- you can totally relate.

Since Raible tore up the screens on our porch and busted through the plexiglass part of the door -- I can relate. When we first got Fauna, she was the one that escaped her cage and destroyed the living room. Marley was kind of like that, too. Although, throughout the book you continue to think, "well, he doesn't really sound like the world's worst dog." Sure, he had his moments...and I'm sure he had quite a few more than the normal family pet. The only part of the book I didn't expect was to read so much about John's life -- but of course, the book has the word "...and Me" in it, so of course we're going to get some family life thrown in.

It was a good read. Entertaining. Sad. Thoughtful. It's harder for me to "critique" nonfiction, because in the end, aren't you critquing the writer's life? Even just a little? I could relate to some of the stories because of having owned three dogs with such strong personalities, but the part I was affected by the most was the end. As Marley get's older, his health becomes affected, and John has to make the impossible decision to put Marly down. I'm not really ruining anything here, because I'm sure you've heard plenty of people say, "oh, the movie is so sad."

As of now, that's all I will say. And that's why I suggest this read, especially if you've ever owned a pet and that pet touched your life.
Labels: book review