We've been going to Culvers a lot lately. Each month we'll get the calendar of flavors and mark off the days we want to go. In the beginning of October or the end of September, we picked up the flavors for October and discovered a fall treat: Nutty Maplelicious. A maple-flavored custard with swirls of brittle chocolate and Spanish peanuts.

It sounded heavenly. Although, the first time it came around, we were in Akron, OH and the closest Culvers was in Columbus, which is nowhere near Akron or Cleveland. It wouldn't have mattered anyway because each Culvers has a different flavor of the day.

So, we marked it on the calendar that Black Friday, the day after Thanksgiving, was going to be our next shot at trying this decadent dessert.

Then, we found out relatives were coming down from Chicago, and they wanted to come down Friday and leave on Saturday. We usually spend our Thanksgiving afternoon at Steph's side of the family and the evening with mine. We were not going to drive down again when we were just there. Especially when Nutty Maplelicious was going to happen. I even put it on the iPod Touch's calendar, so on Friday it would go off and tell us: Happy Nutty Maplelicious Day!

We even planned a parade to celebrate our excitement for the treat.

Luckily, things worked out and Friday we got to spend at home. So, after decorating the house for Christmas, we pulled on our hats and went off to Culvers. Here is the rest of the story in pictures: 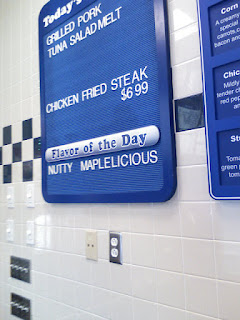 There it is! Posted for all to see! 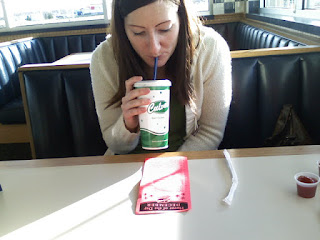 Steph takes a sip of her favorite Culvers Root Beer while she reads the flavors for December. Oh, look! Nutty Maplelicious is on December's calendar, too. If it's really good, we can come back! 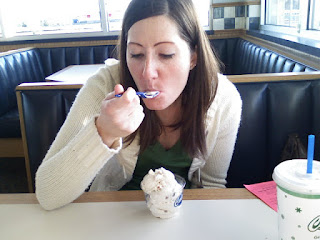 Steph takes the first bite after we finish our Butterburgers. "I can't taste the maple. Oh, there it is. It's more of an after taste." 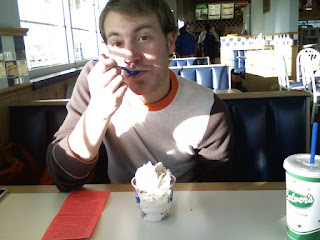 I dig in, too. "Yeah, the maple is faint." What a let down.
That's what we get for making such a big deal out of it.