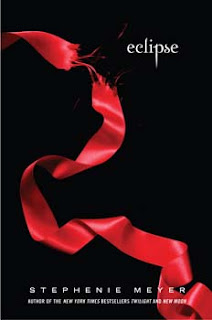 "Eclipse" can kill if thrown, but why bother? The books are simply too addictive to throw across the room, and I'm not frustrated enough to do so -- although, Bella's belly-aching in "New Moon" did get a bit old...but not old enough to hit someone in the face with the tome.

In the first volume, the reader (basically myself) got invested in the strange relationship that has grown between Bella and Edward. In the second volume, Edward's MIA and Bella turns to best-friend-slash-could-be-love Jacob and so the reader (again, me) got invested with that relationship. And because of these two books, two camps have formed: Team Edward and Team Jacob.

And then it happened. I became obsessed with the series, too. Steph couldn't see me without the book. According to her, I was either sleeping, on the computer or reading the book.

So, we come back to Forks, Washington where everyone lives, and close by in Seattle, a string of horrible murders are happening. This is beginning to worry the Cullens (Bella's vampire family) and the reader (it's me again) begins to realize, it's not some serial killer, but...gasp...vampires, or something supernatural like that.

But there's also another problem, Victoria, a vampire who wants Bella dead because Edward killed her vampire-lover, is still around. She lingered in "New Moon" and she's still here in "Eclipse". The end result, to save Bella, ends up teaming the werewolves (Jacob's pack) up with the Cullens (Edward's pack), using the old-school Vampires Against Werewovles motif. And of course, Bella is torn between the two -- just like the ribbon snapping in half on the cover.

Much like the Buffyverse that Joss Whedon created with "Buffy the Vampire Slayer", Stephenie Meyer has created her own Twilightverse. She's borrowed conventions from other vampire tales both fiction, myth and whatever, and has turned them into her own concoction of what she deems a vampire.

She has also created the Volturi, a group of old-old vampires that "rule" the secret society with norms and regulations. There's also more history given out about vampire children and how awful and dangerous they are.

Whoa. She keeps going and going and going, that Meyer does. She has created such a world, that by now, regardless of how poorly or how well written the books are or aren't, you can't help but be so drawn in, these mammoth novels are now quick reads.
Labels: book review