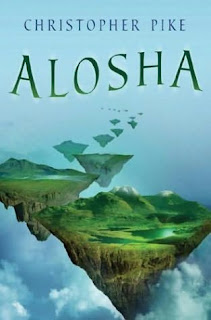 I have been reading Christpher Pike for 14 years. His books are now a comfortable shoe I can put on. Regardless of the topic, I know I can sit down with one of his books and be told a good story.

Originally I fell in love with his edgy storytelling as an eighth grader. With books like "The Midnight Club" about young adults that are living in a hostice for those with terminal illness and "The Last Vampire" series that lasted six books, he can dwell in the world of the macbre. He had touched the world wit his science fiction, and he has now entered the world of fantasy.

Sure he uses a bunch of cliche creatures like fairies and trolls and he even brings out leprachauns, but he does it so well that it's not overly hoaky. Or maybe it is hoaky and I view his writing through rose-tinted sunglasses and he can do no wrong. I think it's the latter. To me, he can do no wrong.

Unlike Dean Koontz who I haven't been reading for as long, but has twice as many books -- he can do wrong.

"Alosha" pits Pike back to his young adult fiction status with Ali, the 13-year-old red head that wants to save the world. With hints of "the Earth strikes back" and environmental consciousness, Pike puts Ali in nature where she discovers a voice, Nemi, who begins telling her that she's not who she seems -- and the voice comes from a tree. Wouldn't we all enjoy a piece of nature telling us that we hold the key to great powers? So, with quick conviction and no sulking, Ali tells her friends about this odd agenda and they follow her up the local mountain to save the real world and close the portal from the elemental world.

The elementals are beginning to come through the portal, hence the troll, elves, fairies, leprachauns, etc., and they are pissed. Anything humans do to their world (like pollution, oil spills, the cutting down of trees) it hurts the elemental world, too. They think humans need to go, but Ali thinks otherwise.

In Pike fashion, we realize that this is just the beginning. As she battles the odds and passes new tests that unlocks her powers, it is a stepping stone of what will be a longer series. How long? Well, conventions said it would be a trilogy, but rumor has it...a fourth book is going to break this trilogy's party up.

I look forward to reading more of Ali's adventure, only because Pike is writing it and he has an unmeasurable imagination. But not yet. I think it's time to embrace an adult novel, don't you? With all the "Twilight" and "Alosha," I'm getting a bit tired of teenage girls.