"The Rule of Four" by Ian Caldwell and Dustin Thomason 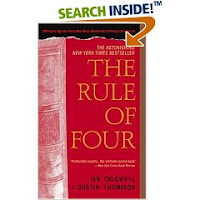 Three books sat at the Half-Priced Book Store for only $1, and I rejoiced to see that the three titles were ones I've been planning on reading. The first book of the triad I tackled was "The Rule of Four" byu Ian Caldwell and Dustin Thomason.


Let me start by this...books written by two authors always make me nervous. Let me clarify that last statement: fiction books written by two authors make me nervous (nonfiction needs two or more writers because of research and studies and large scary terms that would lose only one author that doesn't have a PhD). As a writer, myself, it's very difficult to keep one plot, many characters, different settings, motifs, themes, imagery, and many other literary vernaculars straight just with myself. Now, if I had to keep all of those things straight with another human? Super difficult. Enter a notebook that would hold everything we needed to know about the to-be-published novel. Then enter a fire. Now, hit the play button for suspense music and realize that you're screwed.
Are you lost? Then don't find your answers with "The Rule of Four." Orginally, I picked up the book and wanted to read it as the "anti-Davinci Code" since years ago, Dan Brown's art-suspense novel was so popular, "Harry Potter" seemed like a hermit that would hide in the woods, in comparison. There are many books out there now that use something history or art to be the backbone of an adventure...so I decided to read the shortest one.
The book, with a great deal of research, which I commend the authors, because doing research for a novel is something I'm sure I'm going to need to do eventually, and fear. The research in this book seemed well done and it convinced me. I wished much of the story stuck to the research and let that help tell the story of four friends and how the "Hypnerotomachia Poliphili" (pronunciation: unknown) and its back story affected them.
The story took place at Princeton, with a lot of Princeton culture that seemed so, "well, if you didn't go there, you wouldn't know" and that should've made me shut the book, alone. But after last years plague of unfinished novels, I paid $1 for this one and I wanted to read it for so many years that, dammit, I was going to finish it. Put it this way, it should not have taken me about five weeks to read a 300+ page novel, because I just finished up a 566 page novel in three days.
In "The Rule of Four," Tom, the main character, lives with Gil, Paul and Charlie, as they end their final year at Princeton. Tom, although he had a senior thesis for Shelley's "Frankenstein", spent most of his time and energy on Paul's thesis about the Hypnerotomachia. There is murder, flashbacks, dead relatives and traveling to far-off lands in only three days! As exciting as this should've been, we focus, mainly, on the Hypnerotmachia's history, its author and why Tom is pretty much like his dead father who was so hypnotized by the book. A relationship is thrown in there, too, but it's focused on much too long.
Simply put, I got bored. And frustrated, because I finally was comfortable with pronouncing the dumb book title. In the end, I was more invested in getting the name of the Hypnerotomachia pronounced right in my head, then I was with the characters, plot and final outcome.
Labels: book review