"The History of Anxiety...Yours and Mine" by Patricia Pearson 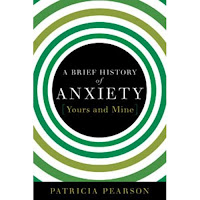 I can't give "The History of Anxiety...Yours and Mine" the best of overall opinions because I didn't read the entire book, but it was pieced together by different short pieces -- and after reading about four or five of them, I got the gist of the book.

The book, by Patricia Pearson, was a collection of short pieces that describes her life with anxiety -- sort of. That's what I wanted. I wanted a bunch of essays by a woman, regardless of age, to relate to. I wanted to hold the book in my hands, clutch it to my bosom, and cry, knowing that someone has finally written about general anxiety disorder in a way that people who don't suffer from it can understand and that people who do suffer from it will relinquish as their Bible.
I clutched the first essay, yelling up to the ceiling fan as it spun, joyously saying, "finally!" but then I got a bunch of "this is the history of anxiety," just like the title of the book stated. Which is good -- it's interesting on an academic level to see where the studies come from, with intermitten...umm, we'll call them suggestions...supplied by Pearson. The history side is interesting, but dense. Her suggestions, although interesting as well, aren't full enough. I wanted her to overreact in her writing, to describe to the nonbeliever of Paxil and Zoloft what it is we go through.
But, perhaps she did do this, because I didn't finish off the rest of the essays. I do know the inside flap eluded to her giving up on medication and trying to find more alternative ways of dealing with an axiety disorder. Since that is the case, I cannot give an honest review.
Who's to say I won't pick it up again? At least read the first essay. If you get that far, you will understand me, and the other millions, who suffer from an axiety disorder, and perhaps we won't seem crazy to you.
Labels: book review