Our secret is out... 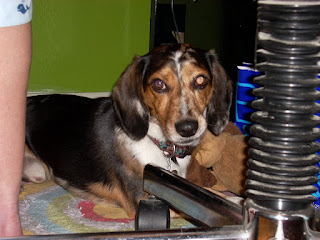 On our way to watch our niece and nephew, with Raible in tow because of stormy weather and we were afraid to leave her in her cage because there's a hole large enough for her head to get stuck in it, a little Beagle came out of nowhere, trotting soaked from the morning's violent thunderstorms.
I stopped cold in the middle of the street, causing a semi and other vehicles to go around me, to pick up the little guy. I opened the door and he came right up to the car. I pulled him in, we checked his tag, and had no choice but to take him with us to my brother's house.
We're still waiting to hear from his owner, but his name is Jake. He responds well to commands, comes when he's called and makes Fauna nervous. Fauna must think we're going to get rid of her. Since we brought him into the house, she's been really calm.
Remember, Fauna has an anxiety disorder and can't sit still.
But Fauna's been nice to let Jake play with one of her toys. He has been walking around with Moose, and as I played with him earlier, he grabbed onto Moose and started humping it. He was trying to hump Raible earlier today. Like a male rabbit trying to get jiggy with an elephant.
And he marked his territory on Steph's work bag.
I think dogs are talking in these parts, because Jake isn't from around here. He's from Muncie, which is northeast from us: "Hey, psst, there's this young couple in Indiana and if you're not happy with your life, you need to see them out. They will make you happy. They rescue dogs."
Labels: the girls

Rebecca said…
Did Jake get back to his owner yet? How was it having 4 critters?? We did that (well, we had 5 at one point) but they are cats! And it was really nice of Fauna to share her toys :)
Wednesday, June 11, 2008