"The Darkest Evening of the Year" by Dean Koontz 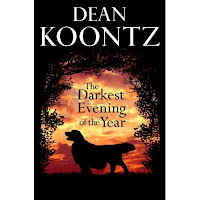 Dean Koontz didn't do it again. For his latest thriller, which was labeled a romance by my library, was a point-of-view jumping nightmare. He starts off with two fairly likeable characters Amy and Brian, who, in the opening scenes, are rescuing a golden retriever from a drunk, abusive man. They also rescue the mother and two children. The little girl who is rescued, whisperes something that continues to haunt Amy throughout the book, something about the past, which she has left behind.

So, there was that where Koontz was trying to bring the fantastic into the story...even though it really wasn't. After reading from Amy's spunky point of view, we then read from Brian's and he, too, has a little bit of a happening with, what seems to be, the supernatural. So, the reader's beginning to think, OK, this might have some elements in it that I can get into. Then it stops. The next chapter features another point of view and that is from Harrow (I think that's the characters name). He's in love with "Moongirl" a woman who can't get enough heat and warmth, and only likes to make love in a room with complete darkness, no windows, no air. She's cold and speaks in three-word sentences. Just like real people do:

"I'll feel better in the heat."

"The fire is better."

So, we don't learn anything about the characters and I haven't even mentioned the principal part yet. Amy rescues a dog named Nickie and for some reason, that name holds weight in Amy's world, which we don't learn about until the very end of the book. Koontz also gets preachy about why golden retrievers are the best dogs in the world, which was a stretch for me, because I don't like goldens.

In a podcast, Koontz talked about how he was super-torn up about his own golden that died, while writing this book and it took him a couple of weeks to get back up to snuff. Then, while on deadline, he was pounding out the book in insane hours. In a sense, no wonder it was terrible.

We have themes about spirituality and redemption from the past, but the bad guys were just too ridiculous: catching things on fire, locking Moongirl's daughter up and using her as blackmail. I mean seriously.

Reading this made it the darkest evening of the year for me.
Labels: book review

Rebecca said…
I gave up on Mr. Koontz years ago. glad I will miss this drek :)