This post was almost in the garbage, but I figured I'd redeem it based on a few good lines. 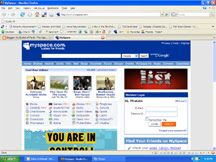 I just spent an hour updating my myspace.com profile. It's so ugly, but the problem with MySpace is that you have no choice but to make it ugly...any design that's out there to use is for either dumb teenagers, or really dumb teenagers. Sure, there are a couple of designs that work, but they're all so super-feminine. All the rest were designed by a blind teenager who's heart just got broken.

Tons of skulls and hearts and naked people and beer. It's sad to see what people are posting as backgrounds on their profiles. I just sigh when I see what their priorities are. I told Steph how bored I was with it and she was quite frank, "you don't have to update it if you don't want to." So, what I might do is link to this here appendix and say, "this is my Myspce WORLD." The reason I became so steadfast one hour on a Sunday was because an old college friend found me, and in order to keep up with old friends, you neeeeeeeeed an awesome Myspace. With that in mind (ideas like this will possess me sometimes, which leads to my much hated anxiety before Steph says something logical that I didn't think of and then I become normal again), I just gave up. I only have a Myspace to keep in touch with people.
So, instead of naked people and beer, I posted a plain orange background.
You can tell orange is one of my favorite colors here.
Labels: pop culture

Anonymous said…
Congratulations!!! You have been nominated for a 2007 Best Of Blog Award!! Especially designed to bring attention to lower profile bloggers, The BoB’s as we like to call them are currently taking nominations in over 20 different categories. To find out more about how your site has a chance to become one of this year’s Best Of’s and how to nominate other bloggers, visit us at www.thebestofblogs.com. Remember voting begins April 14th so make sure you pass the word to your friends, family, and faithful followers.

Rebecca said…
you know, I should be too old to have a myspace account...but I do. Then I decided I needed a face book account. Gah. kinda fun, I guess, but definitely more geared towards high school/college than the 40+ crowd. I wonder if there is like a grown up social network site that isn't a professional network site (like linkedin.com etc) hmmmmm.
Thursday, March 27, 2008