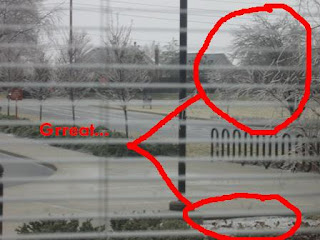 None of this ever happens when we're just about to wake up and head to school.

So, here's the story: For the past month there has been a storm-a-week tearing through the midwest boot-shaped state of Indiana. Since we live close to the central part of the state, we are supposed to get the "better" forecasters. Now, I know meteorology can be a crap-shoot sometimes, but the past month has been more crap than shoot.

Each time the storm front moved in, it happened at night and then stopped in the morning, or there just wasn't enough precipitation to cause delays or cancellations.

No! Instead, it always comes in the afternoon while we're at school. I have three windows in my classroom and I constantly see giant snowflakes covering the ground, making it slippery.

Today, it's rain, freezing rain and sleet. It's enough to cancel all afternoon activities, coat the trees and our windsheilds, but it happens right as school is about to end, not before school and not when I get home, but during. The drive home is always hell. And it's the drive home that we want to take the shortest amount of time, not the longest.

Rebecca said…
Uncle, I, or more accurately, my son, feels your pain. Not one snow day! And the ONE day it snows enough to think about canceling classes, he is already off!! WTH? He was very happy to dust off his sled, but felt really cheated that it was already a vacation day :)