In defense of horror-romance novels

At the media center at my school, a series of books have joined the other, more musty volumes, that have been constantly checked out and craved after. Not since "Harry Potter" have I seen a series become so demanding among the kiddos. The covers look enticing, and great things are being said about them, so I decided to see what the deal was.
It's called "Twilight" and it's by new-comer Stephenie Meyer (maybe not so new, now that it's been out for about two or three years). One of the media specialists had it at home and said I could borrow her copy since it was constantly checked out. I asked her, "Did you think it was a good book?"
She said it was well-written and it made her want to finish it. At least it wasn't horrible and she wanted to stop, but this young adult novel has also been given positive reviews by Publishers Weekly, New York Times, Booklist and School Literary Journal (and Teen People, but I'll ignore that one). Then she gave me a disclaimer.
"It's something teenage girls are really into right now: vampires and romance."
I shrugged that off...
I used to read an author named L.J. Smith. She was brilliant. She wrote these -- well, how can I explain them without sounding ludicrous?

Horror-romance novels.
What? Don't say that. I know it's stupid, but it's not what you think. Hey! Come back here. It's not like I read them still. I do own most of the books by L.J. Smith, however, but ... it's not like they're Harlequin Romance novels...
The novels I read, which were captivating and quick to read, were titled "Night World." 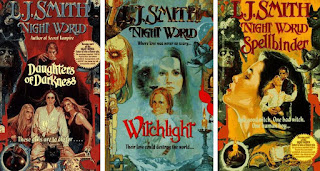 This so-called "night world" was a secret society of vampires, werewolves, witches and shape-shifters. There was something coming, as well, something like the "end of the world" and the people of the night world could stop it. That was the on-going story. The other half of the novels were love stories. People of the night world would fall in love with humans, which was frowned upon. There were ten books total, but what makes me mad is, I read the first nine books religiously, but the last one was never published, at least, not to my knowledge. I'll be searching for it like a maniac after I'm done here.
And so comes "Twilight" which was so popular, it will have it's first movie out this summer (I think). Yes...I said first movie...because there's are four novels in the series.
I've always loved the horror niche because so many things can be done with it. It takes that dark area of life (it could be some huge metaphor about growing up like "Buffy the Vampire Slayer") and humor, drama, romance, thrills can be added to it. It can be a dark period piece like Anne Rice, or it could be contemporary like Stephen King or it could be futuristic like...*draws blank*...
I just didn't think I'd be the type that would fall for horror-romance stories. But it's very "Romeo and Juliet" if you ask me...all that "we're from two separate worlds" drama. It never gets old. Not to me, because I'm not constantly reading it.
Some of you that know me, however, probably aren't so surprised.
Sometimes it isn't about finding a book that's written well or won the Nobel Prize for Literature, but just a good story to get lost in.
Labels: reading

Rebecca said…
Nothing wrong with brain candy, Uncle. Besides the family and I were in Barnes and Noble (a favorite family pass time) last weekend, and I saw the cover for twilight, and was intrigued. I didn't know it was a teen read, so I picked it up to read the back cover, when the clerk came up to me asking if she could help me, informing me that it was YA read, a d it was very good (she read it).

As for horror romance, try Chelsea Quinn Yarbro, especially if you have any interest in historical fiction. So you have romance, horror, and education. What's not to love? The books are very well researched. The lead character is a vampire, therefore immortal. She covers periods from Charlemagne to the Conquistadors in Peru, to World War 1. Borders had them in the horror section. She likes to capture either the emergence of a new society, or the death of one.
Wednesday, March 19, 2008

Anonymous said…
Hello. This post is likeable, and your blog is very interesting, congratulations :-). I will add in my blogroll =). If possible gives a last there on my blog, it is about the Webcam, I hope you enjoy. The address is http://webcam-brasil.blogspot.com. A hug.
Thursday, March 20, 2008

Anonymous said…
Just thought you would like to know that the last book in the Night World series called Strange Fate is due to be released any time now. L.J. Smith has a website that keeps you updated on this, she has a bunch of new books coming out, and even some stories posted on her website. It is www.ljanesmith.net
Wednesday, July 30, 2008