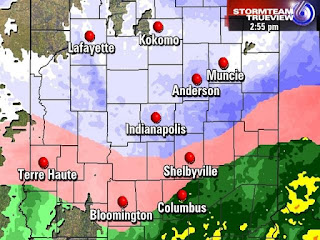 The white means snow. The pink means a scary snow and freezing rain mix. The green is the average wetness of cold, December rain. Since the dawn of time, this weather front has been making it's way east and every Indy channel has been giving it due press...letting us know how many inches it will be, when we can expect it and how many giraffes it will kill.

It supposed to be horrible, but they've been making it the #1 news story each night.

Supposedly, blizzard conditions are to be expected by tomorrow morning, with drifting and blowing. Thursday, during my sick day, when Fauna finally calmed down so I could sleep, our weather radio went berserk and gave me an early warning about the winter storm that was headed our way. Friday at 3 a.m. we were awakened again by the radio. Today, we finally have snow, but the doom isn't supposed to happen until tonight.

Jack Frost will be raping our country side after midnight.

We have tickets to go see a show tomorrow afternoon. My mom signs up for the Broadway Across America, and Steph and I benefit. We join my grandma and her about five times a year to see Broadway shows. Good times. Tomorrow, it's "Dirty Rotten Scoundrels", which I would like to see -- but since we live about an hour away from the actual theater, and there's supposed to be horrid weather tomorrow, we don't know if that will put us in jeopardy. So, my anxiety has decided to kick in and think illogically about how mom will be angry with us if we can't go to the show.

I could not enjoy the snow and the girls outdoors, as much, because I had this sinking dread that mom would be angry with us. Which is asinine, really. Seeing a show is important, but if we're supposed to have blizzard conditions (our cars are a Stratus and the New Beetle), there really is no way we could travel, unless someone wanted to come and save us.

The snow has been docile. We're baking Christmas cookies today and needed more Crisco (which I used to think was lard...the first time I baked cookies with Steph's family and they were making the icing, I was like, "you're putting lard in the icing?" and I was mortified. Since then, because I know it's really vegetable shortening, we still call them Lard Cookies) and Steph went to the store.

The snow has actually stopped, but as far as we know, this is the calm before the storm. We're supposed to have some thunder and lightning in some places. What is that? Thunder snow?

"Sorry, we found something better to do."