I want to be like Dr. House when I grow up

I started watching "House" about a year and a half ago. It was in the run of it's second season and I loved it. The love was for Hugh Laurie's character, because wouldn't we all love to be an ass at work? But also be a genius and be right? I mean, it's one thing to be an ass, but to be an ass and right?
My personality is consumed in the passive-aggressive side of life. Confrontation gives me anxiety, even the small thought of it. Dr. House doesn't have a problem with it at all. He will say what he thinks and be done with it. I say what I think and I ball up in the corner because I don't want people to be mad at me.
Just last week, we went to Logan's Roadhouse with the fam. We sat down and it took the waitress about fifteen minutes to get to the table. I'm sure she was lost in the forest of peanut shells, but she should've had a map. We figured we'd never see her again, so we decided to order drinks and food when she came to the table. It took another fifteen minutes to get the drinks. At this point, I finally, for some strange reason, grew a spine and saw the manager and waved him over. I told him it was taking a really long time just to get drinks and bread (but I think I had a nasty voice, which I didn't mean to have...) and the waitress was right behind him.
"It takes a while to put drink orders and food orders in," she said, with a hint of f--- you in her voice. Maybe it does, but how long does it take to get to the table after we've sat down? Hello, McFly, are you in there?
But regardles, did she have to be right behind him? I never, ever say anything. Ever. I would rather grin and bear it then actually feel like I have to say something to someone. So the one time I do say something, she's right there and she probably went and peed in my food. The rest of the night, I got really hot and felt terrible. Then my anxiety spiked. If I even think I hurt someone's feelings, I feel feverish.
So, I want to be like Dr. House, but in order to do that, I need the old cast to come back. Have you noticed? The writers and producers decided to fix something that wasn't broken. At the end of last season, all the original doctors got fired or left...which left House to find new people. They went down a new direction, one they didn't need to take -- not yet. They could've waited a few seasons before they played that card.
Just like when House was being saught after because of his drug abuse. Season 3 got better after they trashed that story line, just like it will get better after they trash this storyline.
Since I'm not part of the Writer's Guild, I wouldn't mind writing for the show...I'd like to blow up the new characters and bring back all the old ones. I will un-fix what was un-broken!
I will un-right the un-wrongs! 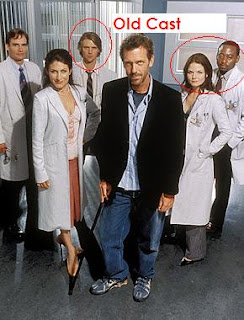