Who knew that two stuffed friends could eat so much at Thanksgiving? They were silly at the dinner table and fed each other sweet potatoes. But, it can't be denied that Humphrey's favorite is green bean casserole and Ghundi's is the gelled, cranberry sauce in a can. 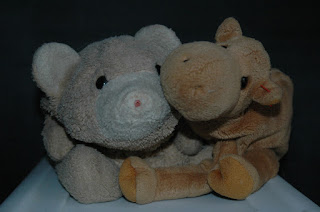 Fun Fact #7
There were 272 million turkeys raised in the U.S. this year. There were 690 million pounds of cranberries produced this year. If you thought Idaho had something to think about, 1.6 billion pounds of sweet potatoes were all over the place, from the can to the table, piping hot with marshmellows and brown sugar all over them. After carving, there was 1 billion pounds of pumpkin goin' around the states, ya'll. Let's hope you had your share of those millions and billions of pounds of food.
Labels: fun fact