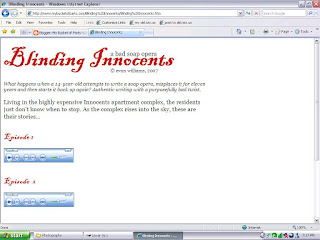 I created a really bad soap opera when I was a teenager. After watching Central Park West on CBS (from the creator of Melrose Place), I decided I could write a campy series, too.
But I lost the notebooks.
Once I moved out of my parents', I went through a bunch of boxes with old notebooks and I came across them. For Christmas, I decided to rewrite ten episodes, record them and burn them onto a CD for Steph. After I created a second season a year later, I decided that I wanted to podcast them. Although you can't put it on your iPod and go running to it, you can (finally!) listen to it on my official Web site.
Please click on the picture above to go straight to the sight and listen in.