"The Road" by Cormac McCarthy 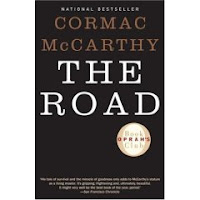 I have read a couple of Orpah's Book Club choices, not because it's a fad I like to dive into, but because some interesting voices in today's writing can be found. The only problem is, since Oprah said so, they're never in at the library.

With that said, Oprah's more recent pick, "The Road", has some critics interested because the book is dark, girlfriend. And I like dark, especially post-apocolyptic themes (like Samuel Beckett) that aren't Christian fiction "end times" cliches.

Set in what seems to be life after nuclear fallout, a man and a boy, never named, travel the road to get down south where the weather might be warmer. Written in a very simple language, never going overboard with description (because how many times can you describe gray and ash before you bore the reader?), "The Road" is bewitching, especially in the times we find our world in today. Touching on themes that are very relevant to right now, McCarthy delivers a simple story of a father and son relying on each other to make it one day at a time, and that's how McCarthy focuses on their tribulations -- moment by moment. The suspense isn't about the cannibals that are mentioned and alluded to or the "bad guys" they hide from during their journey, but whether they will find food and shelter, meeting Maslow's Hierarchy of Needs.

It isn't a book to take lightly. Dark and a bit depressing, I had to put it down between 80 and 100 pages at a time, but since it's a little less than 300 pages, it was worth the journey. Beautifully written, McCarthy uses metaphors any writer would've loved to own.

In the end, love conquers all and love really did keep these two characters alive, especially in a time where love doesn't seem to exist at all.
Labels: book review

Anonymous said…
Come on, of course love conquers all. People sacrifice their own lives for their loved ones all the time. Hell, most of us do it every day. ;0

You sir, write a lovely book report! Were this not on the Oprah's Book Club list I'd read it. Ah hell, maybe I'll give it a try anyway. You know, I can dig dark and depressing most days.
Thursday, July 05, 2007

And yes, Uncle, you do write a heck a review. I have ready many of Oprah's picks, and find that I am rarely disappointed. One quibble--she chose Barbara Kingsolver's Poisonwood Bible for her club. For my money, Prodigal Summer is much better. Rarely have I read more lush writing. I think I enjoyed her voice better than the story, come to think of it.