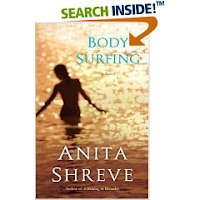 Anita Shreve had me captivated in Africa in "The Last Time They Met" and bored to tears through the slowness of a period-piece in "All He Ever Wanted" and since I had one good experience and one bad experience, it was time to give Anita another try.

And she did a flat job. The characters were not rounded out. Syndey, the main character, was a woman who was already divorced and widowed by the age of 29, and "Body Surfing" churned her love life through themes and imagery of the east coast Atlantic. The story was simple enough: woman hired to be a summer tutor for a rich family, she lived with them for the summer, met the two older brothers (31 and 35), and so the story progresses. Since I love stories set on the coast and I enjoy rich people drama (especially stories of F. Scott Fitzgerald), "Body Surfing" satisfied the need for a quick read that wasn't too complicated with themes.

But I would've like more well-rounded characters and better dialogue, I mean antique-shopping-chatter at the dinner table, I'm sure, had a place for the story if Anita wanted to defend her work.

The story was quickly-paced, which made it a read fit for people who don't have time to read, and in the end, it was a good story. The writing may not have been Anita's strongest, but the story was true to the heart.
Labels: book review

Anonymous said…
Teachers man! You guys get the summer off to read. Yep, green with envy! That book sounds boring as hell though. :)
Thursday, July 05, 2007

Rebecca said…
Anita Shreve has jumped the proverbial shark, in my opinion. I LOVED The Last Time They Met as well as The Pilot's Wife. Great reads. Fortune's Rock not bad either, but I wound up bored with her as well. No desire to read Sea Glass, or Body Surfing. I read All He Ever Wanted. Eh.

Rebecca said…
And if you enjoy dark Irish stories, I recommend Alice McDermott. That Night, Charming Billy, After This, Child of My Heart.
Monday, July 09, 2007