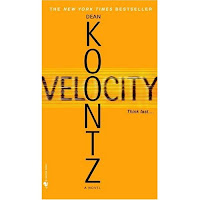 Billy Willes, a bartender who wants to keep to himself, finds a note one night on his Ford Explorer: Take this note to the police and an old woman is killed, do nothing and, instead, a young school teacher is killed.

And this sets off a chain of events, each one more appalling to Billy, but each one Billy's decision.
Dean Koontz, known for his suspense and character-driven novels, does a so-so job, but at least he doesn't waste the pages to do so. In the paperback version, only 400+ pages are devoted to the story and although it's thrilling, it is a very predictable book, unlike his previous stories "False Memory" and "The Taking" which are a thrill-ride from start to end. The most unsettling thing about the book is, instead of going to the police, because he has a dark past since he was fourteen, he keeps taking the dead bodies and disposes them, hiding any evidence of murder. As an avid "CSI" fan, red flags were going up and bells and whistles were going off. "Just go to the police you idiot," I kept saying, but, oh no! circumstantial evidence was the scariest thing in Billy's life...
Whether the book should be called "Veocity" is something that could be debated.
Labels: book review

Anonymous said…
Thanks for the review. I had a bad feeling about this book. I just don't trust Koontz. Sometimes he writes a decent book and other times he writes as if he has no sense of originality at all.
Monday, July 02, 2007

Epimenides said…
I have only read one Koontz book! I don't even remember the title, but it was about a guy who could not come out in the sun because of a skin problem! I thought it was a good thriller, though I was disappointed with the ending!
Wednesday, July 04, 2007

My Bucket of parts said…
Epi - He's actually written a couple of books with that character. I'm trying to stay away from books that go on like a series, even if it's just a repeating character. I'm still in the middle of The Chronicle of Narnia :)
Thursday, July 05, 2007

My Bucket of parts said…
David - "Whispers" was like that. It's 500 pages and slow-going. It's a little more original though. "False Memory" was GREAT, while "The Taking" was perfect.
Thursday, July 05, 2007