I do. It's a metaphor for many things, but it also means what it says: I like bad smells. People have a distinct smell...this we know because of phermones. We are attracted to people by the way they smell. But, people, when they sleep in a room and you go into it in the morning, leave a smell, too. I was aware of this as a teenager and so one day, while clearing my nose of gross blackheads (dragging my pointer finger across the skin and relieving my pores of bacteria) before I wiped the gunk onto the tissue, I smelled it. And I've done it before. And after that.

I know it's gross, but along with zit smell, I left milk in the car recently and it made the VW Bug smell fetid and to me, it wasn't that bad. The metaphor for bad smells include: Lifetime Original Movies, Hallmark Hall of Fames, Romance Novels, Reality TV, Terribly catchy pop songs like "Glamorous" by Fergie and "Girlfriend" by Avril Lavigne, etc.


Random Fact Number Two:
I still like Hootie and the Blowfish

You might ask, "whatever happened to them?" Well, back in 2005 they came out with a semi-country sounding album called Looking for Lucky and it was damn good. They also started the Hootie and the Blowfish foundation in 2000. Recently, I've been reminiscing their good-old albums and decided that it's due time to put "Cracked Rear View" and "Fairweather Johnson" on my iPod.


Random Fact Number Three:
I hate sweatpants with "bunch" at the bottom 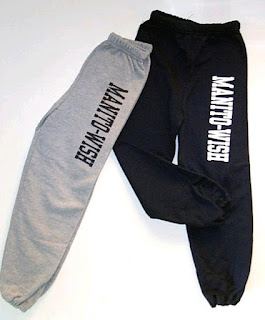 I don't care if you're white, black, from the ghetto, a thug pushing only one leg up, some WASP cheerleader with "beotch" across the butt, an old man, a football player, quit dressing like you shop at the Wal-mart. I am a person that believes pants go over the shoe a bit, not snug at the ankle. A student of mine two years ago agreed with my distaste of this fashion horror and called the ankle elastic "bunch." Plus, men and women both get camel toes in sweatpants.

One day, because Steph knows how much I hate these sweatpants, I walked up to her apartment to meet some friends that drove in from out of town. They were sitting on the porch wearing big, nasty, over-sized t-shirts and sweatpants with bunch. I was dressed nice, but it didn't matter, because I had to change into a pair of white (the worst color, because they are always stained) sweatpants and a yellow t-shirt the size of a billboard. We went to the Wal-mart (in public, I might add) and then out for dinner at Sonic.

Sweathshirts and pants made of this brushed poly-cotton blend are fine. I have a couple pair of sweatpants that just go straight down. They don't bunch. They cannot bunch. 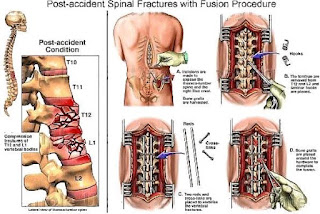 During lunch this past year, the art teacher started talking about her surgery she had recently. She was out for many weeks, and I kept forgetting why. When she told us one afternoon, I remembered why I forgot. She explained how they cut through her back, spine facing up (I put down my sandwich at this point) and cut out part of the herniated disk. I went white, and luckily she didn't notice. I didn't want to be rude and tell her, "Please stop talking about your surgery, I'm going to pass out."

It started when I was in fourth grade and we were watching a video for scoliosis. We were all about to hit our growth spurts and the video was to show us what happened when we grew cock-eyed. They showed the boy and the girl bend over and touch their toes. Their backs were straight and healthy looking. Then they brought in another girl wearing a bathing suit and when she bent over there was a large hump protruding through her skin and it didn't look natural. I went white and the teacher in the room asked if I was OK.

I went home and cried because I didn't want to get scoliosis. The word was big and scary and I didn't want to be stuck wearing a brace. Ever since, back injuries have appalled me. Actually, anything on the Discovery Health Channel appalls me.

The summer after it aired, a friend told me how awesome the show was. I saw the movie and, I'm sorry, how could a TV show be any better?

God was I wrong. And so was "The Academy" for never nominating the show for an Emmy. I caught up with the reruns that summer and realized how funny, but also scary, and hip and well-written the show was. After that I became a devout fan my junior year in high school because the second season finale was amazing. It pitted Buffy against her then-boyfriend/vampire Angel. Angel had turned bad (long story) and she had to fight him and kill him before a portal to hell swallowed everything. He had killed Miss Calendar (a great character and friend) so she fought him, ready to kill him, regardless if they were once in love. Her friend Willow cast a spell, while in the hospital, to restore Angel's soul, which kept him good, and just as his soul was replaced, Buffy noticed, kissed him good bye, and then stuck the sword into him, because that was the only way the portal could close.

To keep it simple: She killed her love.

Amazing. And whenever someone would call during the hour it was on, I was never nice. Didn't you know that I watched "Buffy" from 8 to 9 on Tuesday nights?

I collected all seven seasons on DVD, got a roommate hooked, had "Buffy" nights with friends, etc. I was so sad when it went off air. No show would come across the airwaves with such creative ferocity...

And then came "Lost."

Every Christmas, since my junior year of college, I have given Steph sock puppets. The first two weren't spectacular, nothing more than old socks and marker. But then those two gag gifts took off and the next year she got two hand-stitched, colorful puppets. One boy with a tie and crazy brown hair and a pair of glasses, while the other one, a girl, had long magenta hair and puff paint eyebrows. As each year has progressed she has recieved a horse, giraffe, a rhasta man, countless puppets stitched together with yarn and felt, tacky-glued on googly eyes and one fantastic and neon alien with three eyes, pipe cleaner hair, and nine felt arms. She currently has more than 15 to use with children clients in therapy.

I have shown others my work and they say I could sell my talent at making sock puppets. But I make them for Steph and Steph only. 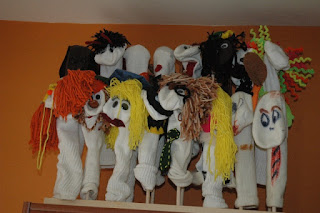 I was only on stage for a handful of high school productions: How to Succeed in Business Without Really Trying (musical), The Curious Savage (play), Cinderella (musical) and The Diary of Anne Frank (play). All of the other productions, I was backstage crew. In the end, every show the director's picked, there was never a roll that let me take a bite out of the stage, or show my God-given talent that would've given me an Oscar. Dammit, I live in regret!

And so I go over-board during the everyday. People have asked me "Were you a theater major?" and I surprise them by saying, "Actually, I was a journalism and English Ed. major." And they look at me dumbfounded. How on earth? Well, to be a teacher, you have to be a bit of a performer -- at least, that's my personal philosophy. Steph and I joke that I'm hystrionic.

Random Fact Number Eight:
I am a Crayola product addict

I have two sets of Crayons, one set I break up and melt with my Crayola Crayon Maker (which makes custom colors, all swirled together). I own practically every color and I'm always on the lookout for what's going to come out next. I enjoy the Changeables and the Overwriters. I think I have every type of Twistable there is...you know the crayons in the plastic casings that move with a little twister-thing on the bottom? I've kept a notebook with me for the past ten years and although writing goes into it, so do pictures, "Terrible Children's Stories", magazine-esque looking pages and without the aid of my trusty Crayolas, I wouldn't be where I am today.

Rebecca said…
First: Thank you for the sangria recipe!

Second: I own my own box of 96 Crayola crayons. Christopher (my 11 year old) has never been allowed to touch 'em.

My husband had back surgery years ago, yuck! And while I don't really like bad smells, I don't think some universally hated smells are bad: skunk funk and horse poo don't bother me in the least. But unventilated human sleep funk I can live without!!!
Monday, July 02, 2007

Anonymous said…
Dude! That was the best 8 random facts ever! I feel like I know you so well. It's amazing. One word: Phat!

You know that stuff you were saying about Buffy? Well that was me with The X-Files. I thought nothing would come along to fill that void and then lo and behold...LOST! My current favorite show ever!

Next time I buy sweat pants I'll make sure they don't have no bunch on 'em. For sure!

Oh and on the smell thing too, yeah, I dig some weird smells too. When I was a kid I had this gross out scratch and sniff book and it had scratch and sniff oil cans, gym socks, vomit, skunk, and other nastiness, I loved that book!

Wow, you've inspired me to the point of exclamation point abuse!!!

One more thing...Cracked Rear View is on my iPod right now and has been since May of last year. Since you raved about it I'll give a listen to Looking for Lucky soon! :
Tuesday, July 03, 2007