We Found a Baby Bunny: Day One 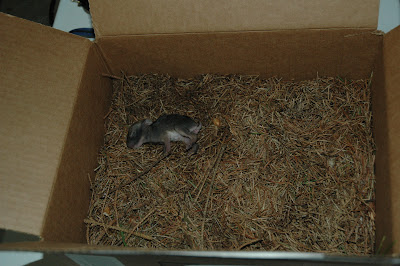 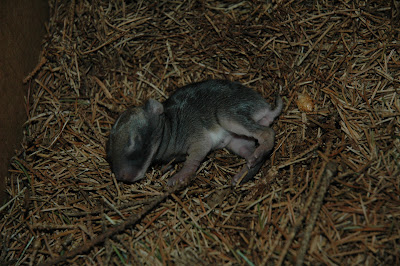 As we were weeding today, our latest edition to the family, Fauna, ran by us with something in her mouth. She dropped it. I picked it up with a shovel and realized that it was a baby animal of some kind. We scolded Fauna, telling her we don't have killers in the family. Apparently she did not learn because a few minutes later we saw her running off with another gray animal in her mouth. I caught up with her and smacked her butt to drop it and she did. Luckily it was still alive. Raible wanted to become friends with it, her large ears grew like satellites, trying to read the baby's radar. I put gloves on and picked her up as it's tiny limbs moved a bit. We took her to the front yard, placed her under one of our large pine trees and hoped for the best. We assumed it was either a bunny, an opposum or a dragon baby.
The day went on. I cleaned the house and tried to peer out our front window ever-so-often to see the baby. I wasn't sure if it was the little bit that I saw or a pine cone.
We went out to dinner, but on the way home Steph became very concerned that we shouldn't have left it outside. Once we got home, we took a light out and discovered it sleeping a few feet to the left of where we left it. It looked like it created a mini-nest out of tiny twigs. I gasped quitely thinking it was dead, but when I moved closer I saw it breathing.
Steph brought out an Amazon.com box. In one hand I had the baby, and I used the other hand to gather pine tree debris to make bedding. I laid her in. She is currently on the washer with the sides taped up, in lieu of baby bunny curiousity. We looked online at pictures, and it's definitely a baby bunny, but we're not sure what to do about it. One site says to leave it alone. Another site says you need to take a wet cotton ball and wipe it on it's privates so it'll pee (if a baby bunny is kept -- not to just go up to it and start rubbing). Another site says that bunnies will die in captivity, while another site tells the reader what to do if a baby bunny is found.
We plan on looking closer for a rabbit nest tomorrow to put the baby back.
Labels: ahmi