This is Fauna Leena 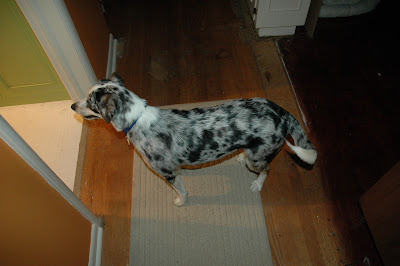 It's not like we went out on a whim. We've even sat down and talked about getting a third dog from time to time. You would've thought we had our fill when Fossa Brown became evil and started attacking the other two dogs and staring at us while we slept. But Fossa was just a taste. We even looked at adoptable dogs while Fossa wanted up on our lap.

I know. We're so mean. I'd make some analogy about children, but you can't really sell them and trade them in and all that. Not unless you're the red-headed step-child.
Raible "wasn't planned" and even though we weren't so sure about her in the beginning, since she tore up our porch, broke through our glass door from the porch and kept escaping, we decided we would be the best home.
Now, instead of escaping through the rout iron fence, she barks to be let in.
But alas, I tangent (as usual).
We drove to Kokomo, Ind. (home to the only Sonic we know now) and met up with a 10-month old Australian Cattle Dog. She was super-friendly and without much thought (except for the warm feeling in our tummies -- did it crave Sonic?) we invited her into the bug and she came home with us. As we drove to Sonic, we decided to name her Fauna Leena. Steph even dreamt about picking up the new pup and she named her Leena in her dream.
She had been shedding so much that white hair kept flying throughout the car and landing on our straws (I had a hot fudge shake with Oreo bites, while Steph had a tropical fruit smoothie).
She has been with us for about a week. She is overly excited about everything. She has escaped from her cage twice (which led us to purchase a large, much stronger cage) and threw our laundered socks around the room, has destroyed a lot of Nigra's toys, destroyed two of my Anita Shrieve books (is she that bad of a writer?) and pooped on the shag rug in the office. I forget that Raible was eight-years-old already when we found her, so she wasn't exactly bursting with energy.
We were also worried because she didn't eat the first four days we had her. And when she's excited or just happy, she not only wags her tail, but shakes her whole butt.
She doesn't attack the other two. Actually, she likes to play chase with Nigra (a favorite Nigran pasttime is running and chasing and doing it with sticks her in her mouth) and she won't sleep in her cage at night. She must be between the two of us on the bed.
This is Fauna Leena. 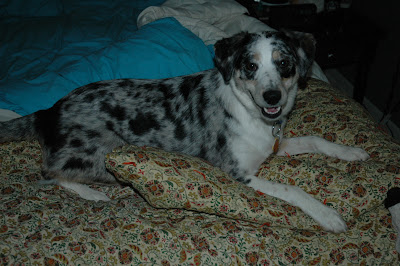