That Was Fossa Brown 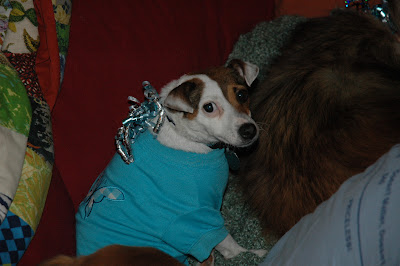 Having "adopted" a stray over a year ago, we've become aware of the dogs out there that need homes. So, we look online ever-so-often to see the big doe eyes behind the fence.

About a month ago, we discovered a Jack Russell with a big, plastic cone around her neck. I had been wanting a smaller dog, and so we visited "Peanut" at a small horse farm here in Anderson. She was four-years-old, had been hit by a car and recovered. The lady's house we visited had Jack Russells running rampant and the one we had our eye on kept jumping up in our laps and bopping us in the face with her snout. We got to know her and decided to go back the next day and pick her up.

On the way home we decided to name her Fossa (like Fossil, since she was mostly white) and we added the name "brown" at the end since she had a couple of brown spots: Fossa Brown was coming home.

The days didn't go too well and we weren't sure why. We have a large yard, fenced-in, so Fossa could run rampant. Although it can be laborious introducing a new animal to two animals that are already living at the house, we had patience. But...

She wasn't learning her name, she ran off and we had to chase her so we could bring her back into the house, she snapped at Raible and Nigra.

We rattled coins and rang the door bell and she didn't even notice. We assumed she was deaf and gave her a second chance. We bought her a t-shirt and a sweater so she would be warm, since she shivered when she went outside. All was well, until one night she slept with her face down in the blanket and out of nowhere attacked Niagra, who had just been sitting there. This was ongoing. Then she started baring her teeth at us.

After a month, we took her back to the foster home where she was more than excited to see Shelly the Jack Russell Keeper.

She was never that excited to see us, so we deemed it OK that Fossa Brown was in a better place.
Labels: the girls