...global warmingly cold temperatures (someone explain that one for me, please), slushy rain drops that pelt and dent cars, tornados and dead lilies.
No wonder there's a yard gnome going on vacations on Travelocity.com commercials, especially to warmer climates like Las Vegas. 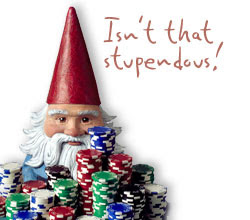 Hoosiers have always joked about that "silly Indiana Weather," but it's true. Granted, I haven't lived anywhere else in my life, but those who have have yet to tell me about their week in weather equally as disturbing as this: freezing temperatures in the morning -- don't forget that coat, ya'll -- to a fairly cooler temperature that a jacket could keep out, to rolling gray clouds and severe thunderstorm warnings, to tornados, to overnight lows of 30 degrees and then snow two days later.

We're all depressed because it's the middle of April and we have to put our snow boots on to go chase the Jack Russel Terrier because she's deaf and can't come when she's called. As of right now on this Saturday evening, there is a small bit of snow gathering. Each flake is different, yes, with fangs and tentacles of poison as it sails down from the sky awaiting it's victim, the plant! And doth that plant believe it will survive this anti-spring weather? Of course it does, but that snowflake's tentacles whip that lily into a limp, yellow-brown pulp.
And we step in it, smearing our shoes all over the place thinking we stepped in another one of Raible's (the big dog) human-sized terds.
The weatherpeople (to be politically correct, since some of the better meteorologists on the TV are female) just smile and say, "and it sucks for you middle America because you don't make enough money to go to a deserted island and drink from coconuts."
And all we have to look at this April is a washed-out screen of horrendous green telling us, yup, more is on the way! 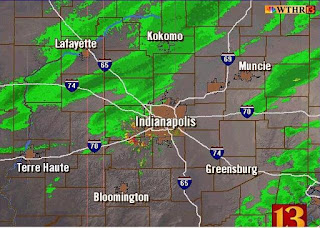