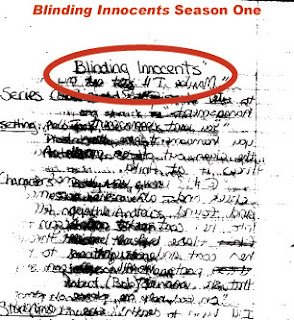 When I was about thirteen or fourteen, a show from the makers of "Melrose Place" aired on CBS called "Central Park West." I watched a couple of episodes and realized it was a flat out soap opera that aired in the evenings.

Since I was a budding writer, I figured, I too could write such captivating garbage.

And so I started and then I grew up. Unaware of what became of those writings, I continued on through high school, college, got married and moved out of the parents' house. Sorting through the boxes of old notebooks that had been hidden for years, I came across remnants of what was titled "Blinding Innocents."

This was my take at a soap opera, and believe me, it was more soap than opera -- granted...there was never any singing, but I digress.

I found the story one Friday night, and Steph and I were already in cahoots about other old writings I had found. But, deep in my heart, although it was horrific writing, I knew there was something there. I took the random snippets of episodes (technically, I had to begin from episodes 3 and 4) and revamped this so-called "Blinding Innocents."

I secretly recorded it on my iPod last year with my iTalk. I uploaded it onto iTunes and then burned a CD for Steph as a Christmas present. She got a 19 track CD filled with ten episodes of purposefully bad writing, as well as nine outtakes (because recording an "audio book" has its pitfalls). It became an instant "classic" in the realm of My Bucket of Parts...where humor is everything.

Now, after a year, I share with you "Blinding Innocents," a melodramatic soap opera that is some parts "Desperate Housewives" and some parts "Nip/Tuck", "As the World Turns", "Melrose Place" and toilet humor.

It wouldn't be a work of My Bucket of Parts if there wasn't any toilet humor.

Each week I will update the content of my podcast (which I cannot figure out how to get on iTunes' Podcasts, but until then, you'll have to stream it from the Internet). Each episode will have an outtake for your enjoyment.

You will see the RSS feed link to the right of the Appendix under the "favorites" links. Please subscribe to the RSS feed and you will know when I have updated "Blinding Innocents."

It's been a pleasure working on something less serious than my novel, and yes, since it was so much fun to write, Season Two is currently being written.

I hope you enjoy. Here is the RSS feed to subscribe to the podcast.

As always, thank you for being an audience for this starving artist.